Head coach in waiting ready to take next step 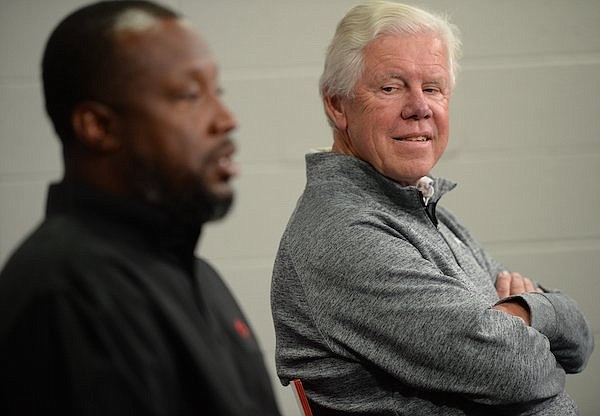 FAYETTEVILLE — No additional credibility is required to Chris Johnson as Arkansas’ head coach in waiting.

Johnson is the three-time national women's assistant track coach of the year. He has coached and recruited All-American sprinters for five Arkansas national championship teams.

He added some over the summer for good measure. Great measure.

A stunning tribute to Johnson’s coaching, given Wilson never reached her high school senior best times while running as a 2021 freshman at Tennessee.

“Her success is her success,” Johnson said. "I’m just the conductor of the train.”

“It reconfirmed that Chris is definitely on everyone’s short list,” said Harter, the outgoing coach who will retire next summer.

Harter advance shortened the list to Arkansas. In 2021 he conferred with Athletic Director Hunter Yurachek for the two-year plan for Harter coaching to retirement with Johnson the successor.

“Basically we’ll switch hats,” Harter said. “He’ll be in this office and I’ll be down the hall as a volunteer helping any way I can while coaching some of our athletes turned pro.”

Some would feel threatened having their Hall of Fame predecessor down the hall.

“Obviously me and Lance have a great relationship,” Johnson said. “So him being here volunteering is an advantage for me as someone to learn from and to banter back and forth about what you should and shouldn’t do.”

Harter carried the whole load dealing with the athletic department administration. He shares that now. Johnson accompanies to the department meetings.

Harter said he’s “really not focused” on his final year head coaching aspect but on the indoor and outdoor track teams he predicts “will be really, really good,” and a cross country team that is underdog to Alabama even while seeking a 10th consecutive SEC championship.

“Cross country is probably one of the youngest teams we’ve had in a long time,” Harter said.