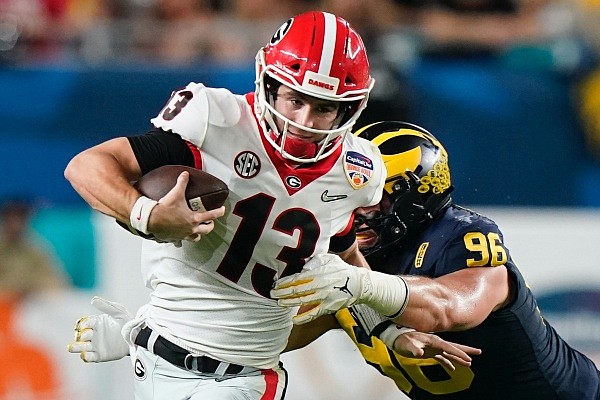 SEC teams’ schedules again are loaded with marquee matchups, both non-conference and conference games that figure to go a long way toward determining the College Football Playoff’s four participants.

Last season it was an all-SEC title game with Georgia beating Alabama 33-18 in Indianapolis as the Bulldogs won their first national championship since 1980.

Georgia and Alabama figure to be in the national title hunt again as the Crimson Tide are ranked No. 1 in The Associated Press preseason poll and the Bulldogs are No. 3 behind Ohio State.

Alabama and Georgia don’t play each other in the regular season, but they’ll be involved in some of the SEC’s top games.

Here are 10 games involving SEC teams that should be on any college football fan’s “don’t miss” list.

The Bulldogs open defense of their national championship against No. 11 Oregon, which will feature some familiar faces.

Oregon also has a new quarterback in senior transfer Bo Nix — who as Auburn’s starter, faced Georgia the past three seasons.

Adding to the irony of the situation is that in Nix’s first start for Auburn in 2019, he threw a last-second, game-winning touchdown pass in the Tigers’ 27-21 victory over Oregon.

Georgia will have a huge home-field advantage playing in Mercedes-Benz Stadium, but the stakes are high for Oregon as well.

If the Ducks could pull off the upset, it would make them a national title contender and be a huge boost for the Pac-12, which is losing USC and UCLA to the Big Ten after this season.

Who could have guessed in August of 2019 when this matchup was announced that it would feature two nationally ranked teams?

Fast forward to this season’s opener and the Razorbacks are coming off a 9-4 season and ranked No. 19 going into Sam Pittman’s third season as coach.

Cincinnati was 13-1 last season with its only loss to Alabama in the College Football Playoff semifinals.

The Bearcats lost a lot of talent, including nine players who were picked in the NFL Draft, but they’re ranked No. 23.

Unfortunately for Arkansas and Cincinnati, their game is kicking off the same time as Georgia-Oregon, so there won’t be as many viewers tuning in as the Razorbacks and Bearcats deserve.

The last time these teams met, the national championship was on the line.

That was Nick Saban’s first of what has become six national championships with the Crimson Tide.

While Saban returned Alabama to glory, the Longhorns have struggled to remain nationally relevant.

But Texas is still a lucrative national brand, which is why the SEC was happy to invite the Longhorns and Oklahoma Sooners to join the conference starting no later than the 2025 season.

Arkansas gave Texas a taste of life in the SEC last season when the Razorbacks pounded the Longhorns 40-21 in Fayetteville.

What will Alabama do to Texas? Probably win big.

But this game is on the “can’t miss” list because along with two historic programs facing each other, Saban will be going against one of his former assistants in Texas Coach Steve Sarkisian, who resurrected his career after being fired at USC with a successful stint as Alabama’s offensive coordinator.

The No. 6 Aggies and No. 17 Hurricanes will meet in a primetime matchup at Kyle Field.

When the schools announced the home-and-home series — Texas A&M plays at Miami in 2023 — in 2016, Jimbo Fisher was coaching Florida State and playing the Hurricanes every season.

Fisher is now going into his fifth season at Texas A&M, where the Aggies are waiting for him to win a national championship as he did at Florida State in 2013.

Given the challenge of the SEC schedule, Texas A&M’s title hopes can’t afford a loss to Miami, where former Alabama assistant Mario Cristobal is in his first season as coach at his alma mater after leading Oregon to a 35-13 record the previous four years.

Fisher has plenty of experience at beating the Hurricanes. He was 7-1 against Miami as Florida State’s coach.

After several close calls, the Razorbacks finally ended their misery against Texas A&M by beating the Aggies 20-10 last season in AT&T Stadium.

Arkansas stopped its losing streak in the series at nine games and beat the Aggies for the first time since A&M joined the SEC in 2012.

It will be the SEC opener for Texas A&M and the first of four consecutive conference games away from College Station.

After playing Arkansas, the Aggies are on the road at Alabama, South Carolina and Mississippi State, so they can ill afford to lose to the Razorbacks.

Sam Pittman became the first Arkansas coach to beat Texas A&M since Bobby Petrino in 2011 when the Razorbacks rallied to win 42-38.

Despite the Aggies’ recent domination, Arkansas leads the all-time series against its former Southwest Conference rival 42-33-3.

Arkansas hasn’t won back-to-back games in the series since taking three in a row from 2009-11.

Alabama already had plenty of incentive for this game after the Aggies upset the Crimson Tide 41-38 in College Station last season on a last-play field goal.

After Alabama Coach Nick Saban, speaking to a group of businessmen in Birmingham in May, accused Texas A&M of buying its No. 1-ranked recruiting class through Name, Image and Likeness financial collectives bank-rolled by boosters, Fisher called a press conference the next day and ripped his former boss.

Fisher, who was Saban’s offensive coordinator at LSU, claimed Texas A&M had done nothing wrong. He accused Saban of being “despicable” and called him a “narcissist” while implying he has cheated to get to the top of the college football mountain and stay there.

Saban apologized for his comments and the two have since downplayed their verbal spat, with Fisher saying it was unfortunate their disagreement became public.

Alabama’s star players — quarterback Bryce Young and linebacker Will Anderson — were asked at SEC Media Days about Fisher’s comments regarding Saban and essentially said they’ll do their talking when the Tide play the Aggies.

That makes it a “must see” game.

Smart and Napier worked together at Alabama from 2013-15 when Smart was the defensive coordinator and Napier coached receivers.

While Georgia is a heavy favorite to win the East and Florida looks to be a couple of recruiting classes away from seriously challenging the Bulldogs, this is a chance for Napier to make an early statement against one of the Gators’ most bitter rivals.

It was in this game last season that things began unraveling for Dan Mullen as Florida’s coach.

Mullen led the Gators to a 29-9 record the previous three seasons, but when Georgia beat Florida 34-7 and media began playing up the differences in how Kirby Smart recruited compared to Mullen, it became clear there might be a coaching change in Gainesville.

Smart wants the game moved out of Jacksonville because neither school can host recruits at the neutral site according to SEC rules.

Napier, asked at SEC Media Days if he’d like to see the game moved to campus sites, said he needs to first experience it in Jacksonville.

Kentucky, coming off a 10-3 season, at SEC Media Days was picked to finish second in the East behind Georgia.

It was a distant second — the Bulldogs received 172 first-place votes compared to 4 for the Wildcats — but the fact Kentucky finished so high in the media voting is notable.

The key for Kentucky is playing well enough leading into the game so that the SEC regular-season finale against Georgia at Kroger Field will determine the East champion.

Mark Stoops has done an incredible job going into his 10th season as Kentucky’s coach and is two victories shy of reaching 61 victories to break Bear Bryant’s school record.

But the Wildcats never have won the East since the SEC divided up into divisions in 1992 with the additions of Arkansas and South Carolina, so getting to Atlanta might mean almost as much to Kentucky fans as winning a basketball national championship.

The only other East team that hasn’t won the division is Vanderbilt.

The Egg Bowl is one of the more underrated rivalries in college football and will be in the national spotlight on Thanksgiving night.

It’s a matchup filled with hate from both fanbases.

The coaches — Lane Kiffin for Ole Miss and Mike Leach for Mississippi State — get along remarkably well under the circumstances, but they also understand the importance of winning the game.

So the pressure is on the Bulldogs to not lose to Ole Miss for a third consecutive year.

Ole Miss hasn’t won three in a row over Mississippi State since 2002-04.

It’s still called the Iron Bowl, even though it hasn’t been played in Birmingham since 1998.

Birmingham hosted the game from 1948-88 before Tigers Coach Pat Dye got it moved to Auburn when Auburn was the home team starting in 1989.

Alabama continued to be the home team in Birmingham until 2000 when the game was played in Tuscaloosa for the first time since 1901.

It’s hard to believe, but Alabama and Auburn did play between 1908 and 1947, but now have arguably the fiercest rivalry in college football.

Alabama was picked at SEC Media Days to win the West, and Auburn was picked seventh, but that doesn’t mean the Iron Bowl won’t be competitive.

Last season Auburn brought a three-game losing streak into the game, but Alabama had to rally to win 24-22 in four overtimes after trailing 10-3 in the fourth quarter.

Auburn Coach Bryan Harsin could be coaching for his job in just his second season with the Tigers after they lost their final five games last year to finish 6-7.

Beating Alabama could go a long way toward Harsin keeping his job for another season — assuming he hasn’t already been fired before the Tigers play the Tide.