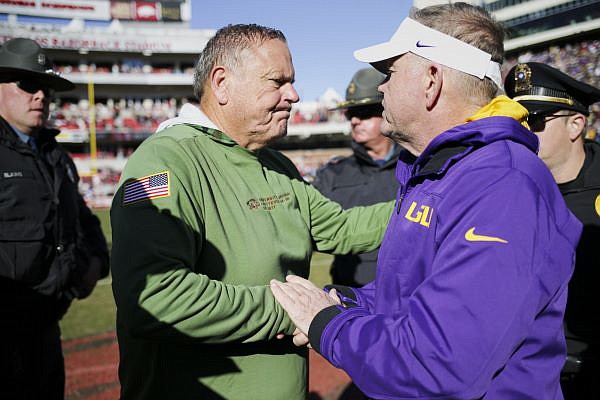 With the 2020 revamped, entirely SEC schedule, Pittman’s 3-7 debut — 4-6 but for a SEC admitted officiating error at Auburn — instantly made him a homespun Hog hit.

Lesser light types like North Texas and San Jose State that so embarrassed Morris before the 45-19 debacle to Western Kentucky canned the coach with two 2019 games remaining.

Minus injured starting quarterback KJ Jefferson, the loss to LSU would have been a moral victory in Morris days.

Not so deemed by Pittman.

And though only losing by two at Mizzou, Pittman said physically, “They whipped our butt. That’s what happened.”

Some restive Razorbacks fans more than concurred. The grumbling is a plus to a point. It shows fans still care rather than passively attuned to losing since the Bret Bielema era closed 4-10 prior to the Morris mishaps.

But before tossing the baby out with the bathwater, Arkansas fans need remembering those years when they would have craved to be 6-6 and bowl bound like these Hogs.

They need perspective that the SEC’s biggest stay put and hiring stories for 2022, Lane Kiffin, granted a king’s ransom to stay at Ole Miss after courted by Auburn, and Freeze, liberated from Liberty by Auburn, also suffered 1-3 forgettable Novembers.

Yet imagine even they heard direly discouraging words. Two weeks ago, now 10-2 Tennessee was shocked, 63-38 at South Carolina.

Seems other than No. 1 Georgia, no SEC team has a November entirely fondly to remember.

And that, Arkansas fans shouldn’t forget.