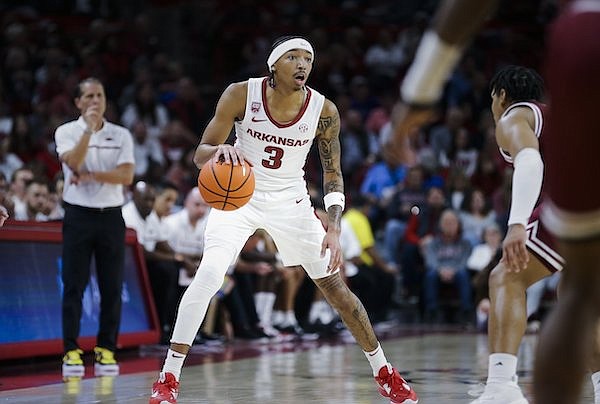 Arkansas guard Nick Smith (3) dribbles the ball during a game against Troy on Monday, Nov. 28, 2022, in Fayetteville.

FAYETTEVILLE — Going into the eighth game of the basketball season, University of Arkansas Coach Eric Musselman has all 13 of the team’s scholarship players available for the first time.

Freshman guard Nick Smith made his college debut in the No. 11 Razorbacks’ 74-61 victory over Troy on Monday night, but junior guard Davonte “Devo” Davis missed the game for an undisclosed reason.

Davis, who started the first six games, announced his return to the team on Wednesday and is expected to be ready to play today against San Jose State along with Smith.

Davis, averaging 8.5 points, 2.7 rebounds and 2.7 assists in 31.3 minutes, is the Razorbacks’ most experienced player under Musselman in his third full season with the program.

“We’re looking forward to having a full roster,” Musselman said before Thursday’s practice. “And I think these couple of [practice] days are going to be really good for Nick. They’ll be good for Devo to get back in the fold as well.”

Smith, who like Davis is from Jacksonville, missed the first six games recovering from a right knee injury. He played six minutes off the bench — all in the first half — against Troy and didn’t score while missing two shots.

With more practice time Smith, a preseason first team All-SEC pick by the coaches and media, could play a more prominent role today.

“We’re still in rehab mode, where he’s doing stuff with [trainer] Matt [Townsend],” Musselman said when asked if Smith’s minutes would be restricted again today. “I don’t have an answer to that, although it’s a great question, just because we still have [more practices].

“I think with any injury, you want to see how it responds each day. To my knowledge, no swelling, which is a great thing.

“He becomes a little bit more active in every little thing that we’re doing now, so he’s 100% back in the fold practice-wise, and I’m sure that Matt and the doctor, they’ll probably talk to me Saturday if there is a restriction.”

Musselman said in a statement before the Troy game Davis was “taking some time away from basketball” and had the team’s full support.

Afterwards Musselman said the team was “respecting Devo’s privacy” in regards to why he missed the game.

Davis said in a statement that he was excited to be back with his teammates and coaches and thanked his family, fans, the basketball program and Musselman especially for their support.

When Arkansas senior forward Kamani Johnson posted photos on his Twitter account of his graduation ceremony Wednesday, Davis was among the Razorbacks in attendance.

“We’re a brotherhood here,” Johnson said of Davis’ return to the team. “Everybody has each other’s back. I think even him showing up to my graduation was just a big moment for me and him.

“We’re all behind him. We’re all one team. So whenever your brother comes back, it’s always a great feeling.”

Musselman said there was good energy with Davis returning for Wednesday’s practice.

“I think everybody was excited to have him back,” Musselman said. “I know everybody really supported him while he was away.

“His infectious energy in practice was great. I think everybody’s happy that he’s back and ready to play.”

Johnson said before Thursday’s practice he saw Smith getting in extra conditioning work on a treadmill.

“I can’t wait until Nick gets going,” Johnson said. “It’s going to be a show. I can’t wait to watch it, honestly.

“Once Nick gets going and everybody just gets to clicking and rolling, it’s going to be a lot of fun in Bud Walton, I can tell you that.”

Arkansas had a strong showing as part of a loaded field at the Maui Invitational last week.

Creighton held off Arkansas after leading by as many as 12 points, and the Razorbacks overcame an 11-point deficit in the second half against the Aztecs.

“I just learned we have a lot of fight in us,” said Arkansas junior guard Ricky Council, who is averaging a team-high 20.1 points. “I knew we were capable, but we really showed it.

“Obviously we came up short against Creighton, but I feel like we showed a lot of toughness and fight and grit in that game. And then San Diego State, we did the same thing and we pulled off the win.

“So I’m proud of the guys and how we played and the toughness we brought.”

Razorbacks freshman guard Anthony Black averaged 22.3 points in the Maui Invitational games and on the season is averaging 14.1 points, 5.7 rebounds, 3.1 assists and 2.2 steals.

“Individually it just shows I can do what the team needs me to do,” Black said of his play in Maui. “Some nights it’s going to be scoring, some nights I’ll need to facilitate. Some nights it might be a little bit of both.

“I think the team always has been pretty confident, but two big wins like that, it helps show what type of team we are, and how good we can be if we lock in and do the little things a little bit better.”

Musselman said the Razorbacks — who have 11 newcomers, including six freshmen — grew from their experience at the Maui Invitational.

“Unbelievable teams in that tournament,” Musselman said. “Sometimes even when you lose there are great learning lessons.

“I thought our young team grew up over those three games. I think as we get into conference play, those are games we will be able to reflect back on and use them as learning lessons.”

With Smith added to the mix, Johnson said the Razorbacks are a “scary” team.

“I feel like every Muss team I’ve been a part of, we kind of click a little bit later,” Johnson said. “This team, we’re not even 100% yet and we’re not even clicking.

“Most of the teams in Maui, those are Elite Eight teams, Final Four-contending teams, and when we stacked up against them even where we’re at now, I felt pretty confident and pretty good going forward.

“I know once everyone buys in, we’re almost there. We’re almost to the clicking point and it’s going to be really scary when we are.”