Razorbacks will play Kansas in the Liberty Bowl 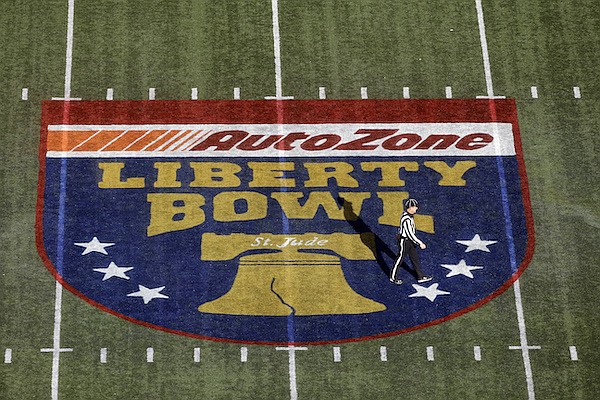 An official walks across the field in the first half of the Liberty Bowl NCAA college football game between Kansas State and Arkansas Saturday, Jan. 2, 2016, in Memphis, Tenn. (AP Photo/Mark Humphrey)

FAYETTEVILLE — Arkansas will play Kansas in the Liberty Bowl on Dec. 28 in Memphis.

The game will be the first between Arkansas and Kansas since 1906, when the Jayhawks won 37-5 in Lawrence, Kan. The Razorbacks also lost 6-0 to Kansas in 1905.

Kansas, under second-year coach Lance Leipold, is in the midst of its best season in more than a decade, but has lost six of seven games leading into the postseason. The Jayhawks began the season 5-0 and reached No. 19 in the Associated Press Top 25 poll.

This will be Kansas’ first time to play in the Liberty Bowl since a 31-18 loss to North Carolina State in December 1973. The Jayhawks have not played in any bowl since they defeated Minnesota in the Insight Bowl to conclude the 2008 season.

Liberty Bowl representatives attended three Arkansas games late in the season, including the Razorbacks’ 29-27 loss to Missouri in the regular-season finale on Nov. 25.

Arkansas has long been an appealing draw for the Liberty Bowl due to proximity. The Razorbacks have played in two of the four most-attended Liberty Bowl games — Arkansas victories over East Carolina and Kansas State to end the 2009 and 2015 seasons, respectively.

Simmons Bank Liberty Stadium has a listed capacity of 58,325.

A report by Brett McMurphy of Action Network earlier this week stated the Liberty Bowl was interested in hosting a matchup between former Big 8 and Big 12 rivals Missouri and Kansas, but that the potential matchup was opposed by Mizzou.