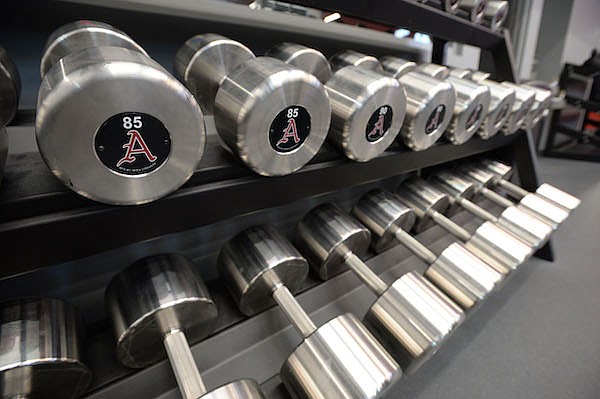 A weight rack is shown on the University of Arkansas campus.

FAYETTEVILLE — The University of Arkansas is expected to hire Ben Sowders as its head strength and conditioning coach for the football program, sources with knowledge of the hiring process told the Arkansas Democrat-Gazette on Monday.

Sowders, 36, who spent the 2022 season as head strength and conditioning coach at the University of Louisville had emerged as a strong candidate over the weekend.

Coach Sam Pittman fired strength Coach Jamil Walker and his staff the day after the Razorbacks fell 29-27 at Missouri in the season finale, as well as nutritionist Julie Zalewski.

Speaking on a Liberty Bowl teleconference on Sunday afternoon, Pittman said he expected the new strength coach in place early this week to conduct conditioning work while the coaches are on the road recruiting.

Pittman said he expected a formal announcement of the new hire soon.

Sowders, a native of Bowling Green, Ky., played linebacker at Western Kentucky, where he advanced from walk-on to a two-year starter. He graduated from Western Kentucky in 2008 with a degree in exercise science and earned his master’s degree in recreation and sport administration in 2010.

Sowders spent four years on the strength and conditioning staff at the University of Georgia from 2018-21, where he overlapped with Pittman’s tenure as the Bulldogs’ offensive line coach from 2016-19.

Sowders was part of Georgia’s national championship staff in 2021 before taking the head strength and conditioning position at Louisville. He had previously worked an internship at Alabama and had positions at Southern Miss, Gardner-Webb, Georgia Tech and McNeese State.