'I knew that I wanted it': Odom leaves Arkansas for UNLV 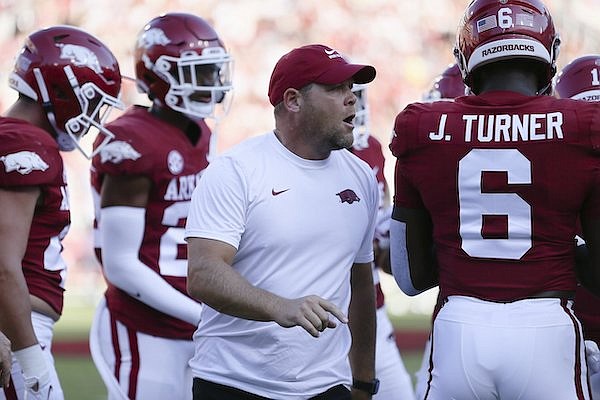 Arkansas defensive coordinator Barry Odom talks to players prior to a game against Missouri State on Saturday, Sept. 17, 2022, in Fayetteville.

FAYETTEVILLE — Arkansas defensive coordinator Barry Odom has been hired as the head coach at UNLV.

Odom will be formally introduced at a news conference in Las Vegas on Wednesday morning. In a statement released by the school Tuesday, Odom thanked UNLV athletics director Erick Harper and school president Keith E. Whitfield for hiring him.

"I'm honored and excited to begin developing a relationship with our student-athletes and provide them a great foundation for success in every area of their lives," Odom said in the statement.

"I believe in the vision and plan that President Whitfield and Mr. Harper have for the UNLV Athletics Department. That alignment piece is critical and together we will achieve great success. This city is founded on opportunity and we look forward to this opportunity to lead this program and engage with this amazing community and Rebels everywhere."

The news came two days after contract talks between Odom and Tulsa reportedly broke down to become head coach at that program. Arkansas coach Sam Pittman said Sunday evening that he expected Odom to coach during the Razorbacks' game against Kansas at the Liberty Bowl on Dec. 28.

The Runnin' Rebels have not had a winning record since they went 7-6 in 2013. Prior to that, the program's last winning season was in 2000 when UNLV defeated Arkansas in the Las Vegas Bowl.

"The moment I knew this job was open, I knew that I wanted it," Odom told UNLV players in a video posted to the football team's social media accounts Tuesday.

Before he was hired as Arkansas' defensive coordinator, Odom spent the majority of his professional career at Missouri in a variety of on-field and off-field positions. He was fired as the Tigers’ head coach in November 2019, one day following a 24-14 victory over the Razorbacks in Little Rock to cap a 6-6 season.

He was one of the first hires made to Pittman's first coaching staff in December 2019. Multiple programs have reportedly tried to hire Odom away during the past three offseasons, but he has remained at Arkansas with changes to his contract.

In March, Odom received a pay raise for the third time in just more than two years with the Razorbacks. His $1.85 million salary in 2022 was the largest ever for a non-head coach at Arkansas. He was under contract through the 2024 season.

Citing Odom's UNLV contract that it obtained through a Freedom of Information Act request, the Southwest Times Record reported Odom will be paid $1.75 million in his first year of a five-year contract.

The Razorbacks were plagued by injuries on defense and struggled in Odom’s third season. They ranked in the bottom four of the SEC in major statistical categories, including 11th in scoring (28.8 points per game) and 13th in total defense (453.3 yards per game).