Sanders declares for NFL, will not play in Arkansas' bowl game 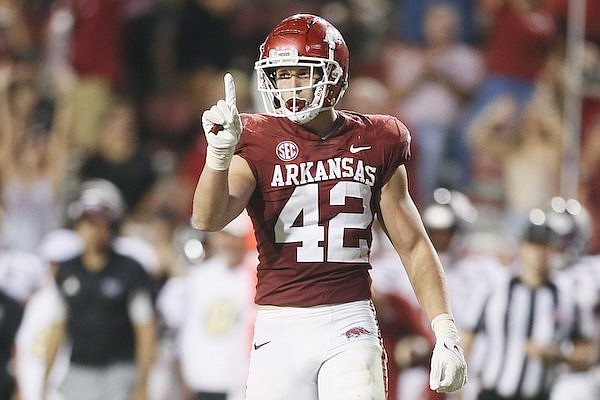 Arkansas linebacker Drew Sanders is shown during a game against Missouri State on Saturday, Sept. 17, 2022, in Fayetteville.

FAYETTEVILLE — All-SEC linebacker Drew Sanders will declare for the NFL Draft and will not play in Arkansas' game against Kansas at the Liberty Bowl.

Sanders, who has one season of eligibility remaining, is the third Razorback to declare for the draft since the end of the regular season. Center Ricky Stromberg and receiver Jadon Haselwood have also said they will enter the draft, and neither is expected to play in the bowl game.

"I've enjoyed playing in college," Sanders told ESPN. "It's always been a dream for me to play in the NFL, ever since I can remember. There's an opportunity for me to take, and I want to take it."

Sanders was a break-out star on Arkansas' defense this year. He led the team with 103 tackles, 13.5 tackles for loss and 9.5 sacks. His sack total was second to Alabama's Will Anderson (10) in the SEC.

Sanders transferred to Arkansas from Alabama during the offseason. He is one of five finalists for the Butkus Award as college football's best linebacker.

"Arkansas has given me an opportunity for me to show my skills and get better by playing and providing the opportunity to be versatile," Sanders told ESPN.

"Without my coaches and teammates being there for me every step of the way this season, I would not have the opportunities that I have today," Sanders wrote. "It was truly an honor and a privilege to be able to work with this group of guys every day."

Sanders could potentially be a first-round pick in the 2023 NFL Draft. ESPN's Mel Kiper ranks him the 17th overall prospect in the draft and best inside linebacker.

In early draft projections, Ryan Wilson of CBS Sports and Dane Brugler of The Athletic each have Sanders being drafted 24th overall by the New York Giants.