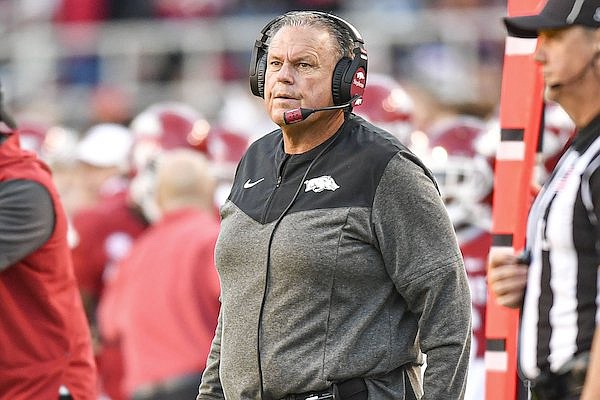 Arkansas coach Sam Pittman is shown during a game against Liberty on Saturday, Nov. 5, 2022, in Fayetteville.

The Razorbacks have lost several players, most notably wide receiver Ketron Jackson, to the portal, which officially opened to players entering their names on Monday.

“We’ve got to do the best possible thing for our program and we have to basically embrace the portal.”

Pittman and his staff have made numerous in-home visits to Arkansas' 23 commitments since the contact period started Dec. 2, and they have several others to visit while attempting to find transfers to replace outgoing transfers.

Pittman is also trying to hire a new defensive coordinator with Barry Odom going to UNLV as head coach, and planning to host official visitors this weekend and next week before the dead period begins Dec. 19.

Throw in Arkansas starting practice Saturday for the Dec. 28 game against Kansas, he and his staff have a lot on their plate.

Pittman and offensive line coach Cody Kennedy visited with Bentonville offensive lineman Joey Su'a on Thursday morning prior to making it to Memphis for the news conference.

They later visited offensive lineman commitment Luke Brown in Paris, Tenn., and joined up with linebackers coach Michael Scherer in Mississippi to do an in-home visit with linebacker pledge Alex Sanford.

Before the advent of the portal in 2018, college coaches could concentrate on seeing commitments and underclassmen in December and January while preparing for a bowl game. The portal adds another layer of responsibility.

“Certainly a lot of moving parts,” Pittman said. “It will (impact) high school recruiting simply because next week instead of having every one of our coaches out on the road recruiting, going in and seeing on 2024s and things of that nature, half the staff will be in having official visits, so it certainly has changed.

“And we’re embracing it, so we’re going to embrace the rule.”