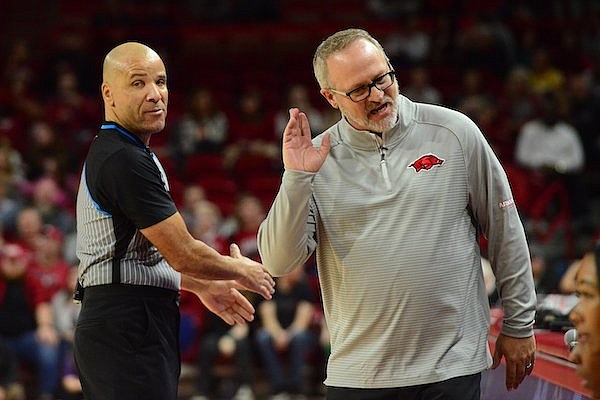 Arkansas coach Mike Neighbors is shown during a game against LSU on Thursday, Dec. 29, 2022, in Fayetteville.

FAYETTEVILLE — On a night when the 24th-ranked University of Arkansas women’s basketball team held the nation’s highest-scoring team to 69 points, the Razorbacks could not buy a basket of their own.

“Offensively, we really struggled to find good shots, which led to what we call turnover shots,” Arkansas Coach Mike Neighbors said. “I think we only had four or five early turnovers, but we had five or six shots that led to transition. I thought that set the tone. I thought that carried over to some of our early defensive mistakes, which let them get off to a good start. Once we got some of the defensive stuff solved, we never did crack the offensive code to get the shots that we needed.”

“To get out-rebounded by 30, that’s the killer right there,” Neighbors said. “I mean, they got almost as many offensive rebounds as we did defensive.”

LSU Coach Kim Mulkey, who gained her first win against a Neighbors-coached team, said she was pleased with the Tigers’ defensive intensity. Arkansas (13-3, 0-1) was limited to 6 of 26 on three-pointers and only shot 12 free throws, which was well below its average of 27.

Tigers star forward Angel Reese finished with 19 points and 16 rebounds. She and LaDazhia Williams, who had 15 rebounds, combined to out-rebound Arkansas as a whole.

“That is what they emphasize,” Neighbors said of LSU. “They don’t demoralize you with pace or with this or that. They demoralize you with, ‘Hey, we guarded them,’ and they just stick it back in on you. Or they miss a free throw and just get in there.

"Don’t get me wrong, there are some things we can improve technique-wise, but Angel Reese is one of the best rebounders our game has seen maybe since [former WNBA star] Courtney Paris.”

Both teams had a cold start shooting, but Arkansas took a 7-6 lead into the first media timeout after an Erynn Barnum layup. The Razorbacks then went on a 5:39 scoring drought, which LSU capitalized on with second-chance points. The Tigers out-rebounded Arkansas in the first period, 24-7, including 10 offensive rebounds.

LSU went on an 8-0 run, but Makayla Daniels hit a driving layup with 22 seconds left in the quarter to end the streak. Reese scored 6 points and hauled in 7 rebounds to help the Tigers to a 14-9 advantage by the end of the quarter.

Alexis Morris opened the next quarter with a three-pointer for LSU, which began a quick 7-0 run to put the Tigers ahead 21-9, forcing Neighbors to take a timeout. Barnum ended the streak with a layup, which began a 7-2 Arkansas run.

Back-to-back threes by Morris kept a cushion for LSU, and over the half’s final three minutes, both teams scored six points.

The Tigers led at intermission 38-25, helped by 3-of-15 three-point shooting and 4-of-10 free-throw shooting by the Razorbacks.

Samara Spencer opened the third quarter with consecutive three-pointers, but LSU responded with a 6-0 spurt to go up 46-31. A three from Daniels followed by a Barnum layup trimmed the Tigers’ lead to 46-36 at the media break.

LSU then responded with a 9-2 run, ballooning its lead to 55-38 entering the fourth quarter. The Tigers kept the momentum rolling, scoring the first five points of the fourth.

“If we can’t stop strings like that and we can’t find a way to get a stop or get a score, there’s nobody in our league that we can beat,” Neighbors said of the scoring lapse.

The Tigers held Arkansas to seven points in the fourth quarter. Morris and Reese finished tied with a game-high 19 points. Spencer and Daniels led Arkansas in scoring with 17 and 10 points, respectively.

The loss put Arkansas on a three-game losing skid after starting the year 13-0. The Razorbacks are scheduled to play Sunday at Kentucky.