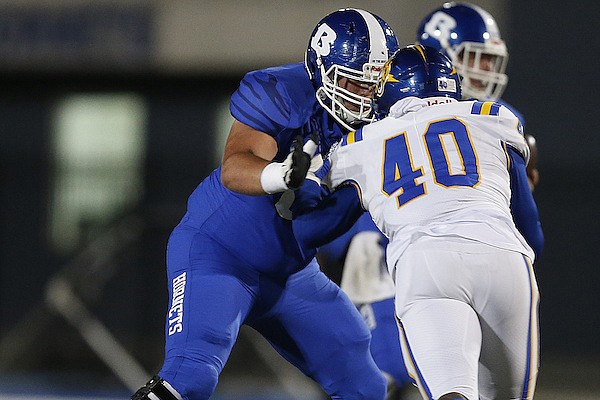 Bryant offensive lineman Brooks Edmonson (left) is shown during a game against North Little Rock on Friday, Oct. 29, 2021, in Bryant.

Edmonson, 6-5, 285 pounds, was committed to Princeton before flipping his commitment to the Razorbacks. He also had  offers from Louisiana-Monroe, Kansas Pennsylvania, Columbia, Dartmouth, Georgetown and Middle Tennessee.

“Brooks is a great player for us, a three-year starter,” Bryant coach Buck James said. “He has done everything a high school player can do. He is very unselfish works tirelessly in the classroom and the football field and weight room. Brooks is going to win life and he will do whatever he set his mind to do. He has proven that in his high school career.

“He is part of a 42-game winning streak and four straight state championships. He and Will Diggins (UCA commitment) have started more games than any other Bryant players in school history.”

"Being a kid from Arkansas, there’s only one place I’ve always wanted to be," Edmonson said. "I’m so blessed to have gotten the opportunity to play on the Hill, and I plan to work hard and take full advantage of it."