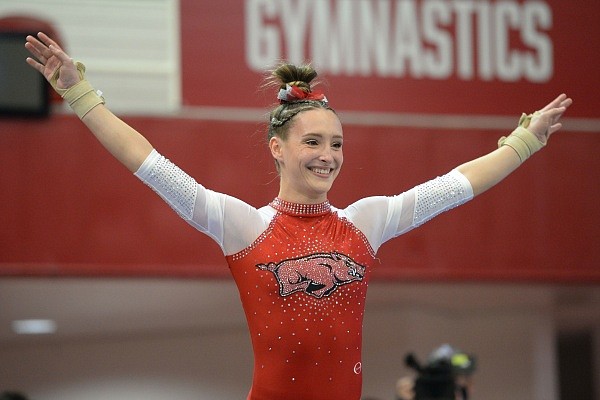 Arkansas’ Kennedy Hambrick competes Friday, Jan. 7, 2022, in the vault portion of the Razorbacks’ match with Ohio State in Barnhill Arena in Fayetteville. Visit nwaonline.com/220108Daily/ for the photo gallery.

FAYETTEVILLE — The University of Arkansas was not in mid-season form on a rare, rescheduled Sunday afternoon meet in the aftermath of a snowstorm, but the No. 13 Razorbacks were good enough to edge past the 197-point mark to claim a dual meet win over Southeast Missouri State.

Freshman Leah Smith claimed her first all-around title while, Kennedy Hambrick won three events and Sarah Shaffer took the uneven parallel bars as the Razorbacks (2-2) dominated the Redhawks 197.05 to 194.15 before a crowd of 2,716 at Barnhill Arena.

“I’m proud of the way they came out and dealt with adversity we had again this week, which was not covid related for the first time,” Arkansas Coach Jordyn Wieber said. “To have a 197-plus with a couple of mistakes on beam and one mistake on bars, we know we still have room to improve, and I’m just waiting on them to put it all together in one meet.

"It’s definitely another stepping stone toward where we need to be in the postseason.”

Arkansas posted its second 197 of the season, highlighted by a 49.55 on the floor exercise finale, which was just off the school record of 49.6 set against Alabama in 2015.

Smith scored a 9.875 to tie fellow Razorback freshman Maddie Jones on the floor to cap the high-level meet. Smith scored a 9.85 on the vault, bars and beam to finish with a career-high 39.425, just ahead of Hambrick (39.375) in the all-around competition.

“I just feel each meet she goes out and gets a little more confident,” Wieber said of Smith. “I can see it in her face. I can see it in her performances. She’s absolutely a star, obviously, but she’s getting a little bit better each week, which is exciting.

"I’m just really excited about what she’s capable of the rest of the season. She’s quickly becoming an amazing leader, just right side by side with Kennedy in the all-around.”

Arkansas improved to 6-0 against SEMO in the hastily scheduled meet, which came after both schools had cancellations Friday due to weather and travel concerns.

Hambrick was dominant on all but one event, the uneven bars, in which she had an uncharacteristic mistake in a transition element between the bars. Otherwise, the senior won the vault (9.925), the floor and beam (9.975), where she tied the school record held by former teammate Sophia Carter.

“She’s getting really close to that 10, which is exciting, with a 9.975,” Wieber said. “I’m just really proud of the way she performed in the other three events after having a mistake on bars. She came back on beam and floor really strong.”

Hambrick’s beam work and a 9.95 on that event from Amanda Elswick were clutch, as they came after a fall on that apparatus. Elswick also had a second-place showing on the vault with a 9.9.

Wieber elected to rest the super senior Shaffer on all but the bars, with a short week now facing the Razorbacks to prepare for Friday’s home meet against No. 11 Kentucky. The move gave Shaffer the chance to hone in on bars and she did it with a career-high tying 9.925 that was just ahead of Jensen Scalzo’s 9.9.

On the floor exercise, junior Madison Hickey equaled her career high with a 9.9 to tie freshman Makenzie Sedlacek for third behind Hambrick and senior Bailey Lovett (9.925).

SEMO, coming off a championship in last year’s USA Gymnastics Women’s Collegiate meet, posted a season’s best score. The Redhawks were led by junior Jolie Miller, whose 9.875 was good for third on the bars, and senior Anna Kaziska, who scored 9.875 to finish third on the beam.

The Redhawks had no room for error on their opening event, the bars, with only five gymnasts in the lineup, and survived it without having to count a fall.