SEC Report: 3s are not dropping for Alabama 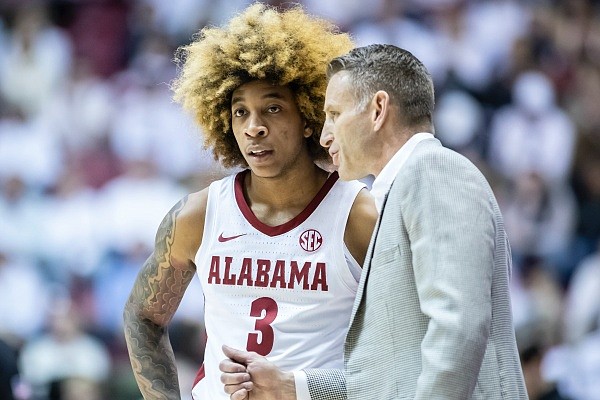 Alabama coach Nate Oats talks with Alabama guard JD Davison (3) during the first half of an NCAA college basketball game against Baylor, Saturday, Jan. 29, 2022, in Tuscaloosa, Ala. (AP Photo/Vasha Hunt)

FAYETTEVILLE — The three-point shooting analytics and execution that helped power Alabama to the SEC overall and tournament titles last season are working against the Crimson Tide this year.

Alabama is six games behind SEC leader Auburn with eight games to play, and a lot of the Crimson Tide’s issues are centered around poor productivity from the three-point line, which Coach Nate Oats utilized better than anybody last year.

Former Alabama quarterback Greg McElroy pointed this nugget out on Twitter: Alabama ranks 8th among 350 Division I teams and first in the SEC with 683 three-point field goal attempts, but it is 318th nationally and 13th in the conference with 30.5% accuracy beyond the arc.

Alabama resumes action Wednesday at Ole Miss in the Tide’s first game against an unranked opponent in two weeks.

CBSSports.com’s Jerry Palm lists both Florida and Mississippi State among his first four teams out of the NCAA Tournament in his latest projection, joining North Carolina and Florida State in an all Power 5 quartet.

The six SEC teams Palm projects into the 68-team field are clear cut at this point, with Auburn a No. 1 seed, Kentucky a 3, Alabama and LSU as 6s, Tennessee a 7, and Arkansas an 8.

ESPN.com’s Joe Lunardi did his last projection before the weekend’s games and he’s of similar mind, with Florida being the first team left out of the tourney in his bracket pick.

He has Auburn as the top overall seed, leading these SEC teams: 2 seed Kentucky, 5 seed Alabama, 6 seeds LSU and Tennessee, and 8 seed Arkansas.

Molinar is the only SEC player to score in double figures for all of his team’s games. The junior is averaging 18.2 points per game.

Shaedon Sharpe, a 6-5 shooting guard who was the top recruit in 2022 before re-classifying and enrolling early at Kentucky last month, will not play this season, Coach John Calipari re-affirmed on Monday.

“After talking with Shaedon and his parents, we want to end all of the speculation by again saying that he will not play for us this season,” Calipari wrote on his Twitter account. “He is committed to bettering himself and our team in practice this year and being better prepared to lead us next season.”

There had been speculation Sharpe might play this season, and it intensified when ESPN reported in late January that he would be eligible for this year’s NBA Draft. Sharpe, a native of London, Ontario, who played prep ball in Kansas and Arizona, will be 19 later this year, which would meet the draft eligibility requirement. His graduation status had been a sticking point, but a check determined Sharpe had the necessary credits to graduate prior to the start of the current NBA season.

LSU and Texas A&M, who both got off to hot starts, were trending in the wrong direction as conference play trickled over the halfway point on Saturday.

One of the two struggling teams will be feeling better soon as they meet at Texas A&M’s Reed Arena tonight at 6 (SEC Network).

LSU had a lackluster first-half showing in a 75-66 loss at Vanderbilt on Saturday, the Tigers’ sixth loss in their last seven games.

LSU has trailed Ole Miss by 24 points and Vanderbilt by 21 points in its last two games before staging unsuccessful rallies.

Xavier Pinson’s sprained knee has cost the Tigers a valuable ball handler and distributor in recent weeks, but there are more issues than that. LSU allowed 11 three-pointers by Vandy’s Rodney Chatman and Myles Stute, whose shooting ranges were circled on the scouting report.

“Health-related, attention to detail … there’s different issues on different things,” LSU Coach Will Wade said. “Some of it’s health, but we can’t blame it all on that. Everybody’s got some issues.

“We don’t follow the details on the scouting report. We give up 11 threes to two of their best shooters. That’s a detail issue.”

Florida had three scoring droughts of at least three minutes and 50 seconds in the first half of its offensively challenged 62-57 win in overtime against Ole Miss at the ExacTech Center on Saturday.

Ole Miss could only outscore the Gators 23-0 during those lengthy spans, and led by 30-21 at intermission.

The Gators led 48-42 on Myreon Jones’ three-pointer with 3:36 remaining, but they went scoreless the rest of regulation as a 6-0 mini-run by the Rebels forced overtime.

Auburn’s Walker Kessler and Kentucky’s Oscar Tshiebwe were named as two of 10 players on the final watch list for the Kareem Abdul-Jabbar Center of the Year Award on Friday.

Kessler is averaging 11.5 points, 7.9 rebounds, and 4.2 blocked shots per game, with his 93 blocks leading the SEC and ranking second in the nation. The 7-footer has eight double-doubles and the program’s second triple-double this season. Kessler leads the SEC by shooting 70.1% in league play.

Tshiebwe is sixth in SEC scoring at 15.8 points per game and he leads the nation with 15.2 rebounds per game. He has 17 double-doubles to rank third in the nation and he has double-figure rebounds in all but two games. Tshiebwe is shooting 51.4% in SEC play and his 59.4% in all games is the highest among qualifiers in the SEC. Kessler is shooting 63.3% in all games but does not have enough made field goals to qualify.

The other players in the top 10: Adama Sanogo of UConn, Mark Williams of Duke, Drew Timme of Gonzaga, Kofi Cockburn of Illinois, Hunter Dickinson of Michigan, Armando Bacot of North Carolina, Nate Watson of Providence and Zach Edey of Purdue.

Auburn’s Wendell Green Jr. and Tennessee’s Zakai Zeigler were named SEC players of the week by the league office on Monday.

Green, a sophomore from Detroit, picked up the player of the week honor after averaging 21 points, 6.5 rebounds and 4.5 assists in wins over Alabama and Georgia. Green hit the game-winning shot with 3.3 seconds left at Georgia and scored 23 points, had 8 rebounds and 6 assists in the win over Alabama.

Zeigler, a 5-9 guard from Long Island, N.Y., was named freshman of the week after averaging 16 points, 3 assists and 2.5 steals and converting 6 of 11 three-point shots in wins over Texas A&M and South Carolina. After being held scoreless in the first half at South Carolina, Zeigler responded with a career-high 18 points on 6 of 9 shooting, while notching 3 assists and 3 steals.

ESPN’s College GameDay will be in Auburn, Ala., for Saturday’s 11 a.m. Texas A&M at Auburn game with the possibility of the Tigers extending their winning streak to 20 games. But first Arkansas will welcome its first opposing No. 1 into Walton Arena tonight.

“To win here [at Alabama], they never lose here. I hate to tell you, neither does Kansas. They don’t lose at home.” — Kentucky Coach John Calipari after road wins at Kansas and Alabama.

“It was a frustrating shooting night for us. It’s hard to win games going 3-of-30 from three. … I thought our defense was better overall than it had been in some of our loses… otherwise, we would have gotten blown out. But our offense really failed us tonight.” — Alabama Coach Nate Oats after a 66-55 loss to Kentucky

“There’s some negative to it. But the positive to it: Adversity, adversity, adversity. I wear that out, I know, but the resiliency, the confidence to stay the course, the increased mental toughness.” — Florida Coach Mike White on rallying to win from large deficits the last 3 games

10 – Points and assists for Florida guard Tyree Appleby (Jacksonville), who also had a streak of 23 consecutive made free throws snapped while notching his first double-double as a Gator vs. Ole Miss