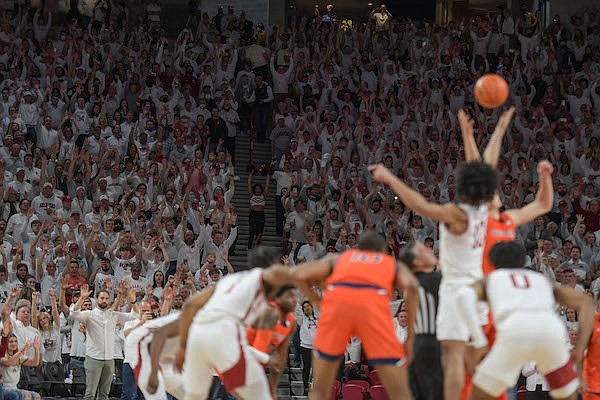 Arkansas' crowd is shown at the overtime tipoff during the Razorbacks' game against Auburn on Tuesday, Feb. 8, 2022, in Fayetteville. Arkansas defeated the top-ranked Tigers 80-76. (Hank Layton, NWA Democrat-Gazette)

Never mind that you cost your school $250,000 for another post-game party in the middle of the court. Most everyone in the country knows Razorback Nation is alive and well.

I chided someone a couple of years ago for complaining about lack of performance by Arkansas fans at both football and basketball games.

Arkansas fans can and do care, they just needed something to care about. The right coaches could solve the problem and they have done that in grand fashion in the last 12 months.

Eric Musselman, in his third season, fixed basketball last year with an Elite Eight trip in the NCAA Tournament. Sam Pittman accomplished the same thing last year in football with a 9-4 season that included three trophies in rivalry games and one at the Outback Bowl.

The Hogs still have to stamp their ticket to the NCAA Tournament, but the 80-76 victory over No. 1 Auburn on Tuesday night suggests it's likely to happen. The Hogs have won nine straight games ahead of Saturday’s trip to play defending SEC champion Alabama, as dangerous as any team in the country.

The triumph over Auburn was one for the ages. It wasn't the all-time greatest in program history, just the best at Nolan Richardson Court.

With a record 20,327 screaming their loudest at Bud Walton Arena, it’s clear that Arkansas fans still have the best home court in the SEC.

That’s not what Dane Bradshaw and I debated Wednesday afternoon after his return to work as president at Thunder Enterprises in Chattanooga, Tenn. The TV analyst for ESPN didn’t have to be prodded about what he saw and heard Tuesday night.

“It was the greatest atmosphere at a sporting event as a broadcaster or a fan,” Bradshaw said. “I’d never been a part of a court storming as an analyst or a fan, but was in one as a player.”

Bradshaw was a team captain for Bruce Pearl at Tennessee, earning two degrees while playing for the current Auburn coach. Interestingly, Pearl wrote the forward in Bradshaw’s book, "Vertical Leap: Inside the Rise of Tennessee Basketball."

The Memphis White Station graduate was still excited about working the Arkansas game while sitting at his desk 18 hours later.

“You are going to be on a high after a game like that for a while,” he said. “I had no vested interest in the game, but seeing the students erupt like that is neat and special.

“I worked the game and then watched Jaylin Williams and JD Notae dancing in the middle of that ‘white out’ crowd in the center of the court. I don’t think anyone who was there will forget that over the next 20 years.”

Bradshaw didn’t sleep much last night and was at the Northwest Arkansas National Airport early for a 6 a.m. flight. He pulled up the game on his laptop to watch it again waiting to board.

“I enjoyed it the second time, too,” he said. “Our ESPN crew did such a great job of getting us the replays. It was a great watch.”

It was a great listen, too. Tom Hart, the play-by-play announcer, is superb.

Bradshaw gave instant feedback on the plays called by Musselman and Pearl, and the execution by the players. He is not afraid to call out a wrong call by an official. I tend to agree with everything in his analysis.

There is no argument when Bradshaw said afterward “the whole thing had the makings of an upset. Auburn was a little bit vulnerable without its starting point guard (Zep Jasper) and was exhausted from playing several weeks with the No. 1 target on its chest.”

There is also the flip side: the Hogs are red hot.

“You’ve got Arkansas riding a winning streak with a sellout crowd,” Bradshaw said. “How it played out was wonderful to watch. The Xs and Os were great. Both teams were so well prepared. They both do great scouting reports.

“In the end, you figured it was going to be the team that makes the toughest shots that was going to win. Neither team was getting any good looks.

The stats confirm those points. Auburn led in rebounds, 60-42, with 24 points on second chances. Arkansas canned 26 of 32 foul shots while Auburn made 8 of 17.

The overtime numbers from the foul line are telling. Arkansas made 11 of 14 foul shots in the extra period; Auburn missed its three free throws.

The Hogs had only one field goal in overtime, a three-point shot by Notae.

“I was really impressed with JD Notae — and some of the others, too — for the way he closed out the game after playing all of those minutes,” Bradshaw said.

The other telling number: Arkansas led 16-2 in fast-break points. That’s what happens when defense forces 19 turnovers, most of them in live-ball situations.

Defense wins. It’s been the case during the fun days with Eddie Sutton and Nolan Richardson at the helm. It is with Musselman, too.

The fans line up to see effort and that combination leads to victories. Of all the things that I notice, it’s the effort by players that seems to be the essence of coaching.

Arkansas has that now with this basketball staff. It’s great preparation that leads to winning streaks.

But, you can play hard without playing well. It’s an unlikely combination. But when it comes together like with these Musselman teams, there was no doubt Bud Walton Arena would be rocking.

Just as fans should be thankful for what’s happening on the court, it’s also correct to offer a tip of the cap to Auburn. You need a worthy opponent. To beat a No. 1 team at home, one has to first visit.

Truly, that was a great Auburn team. It was just what the Hogs needed for a great celebration.