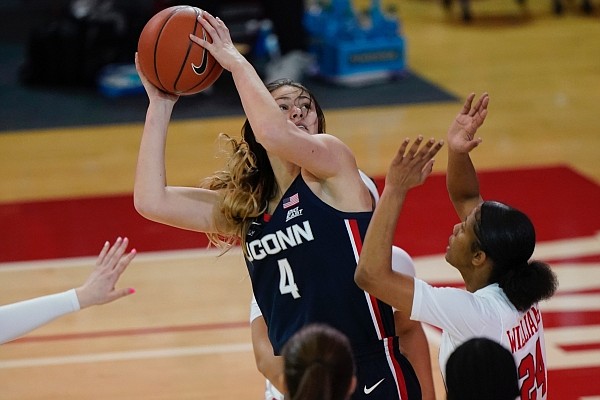 Like most coaches coming down the stretch of a college basketball season, Arkansas women’s coach Mike Neighbors is focused on the present and not the future.

That’s a way of honoring star Amber Ramirez, the team’s lone senior who has been a a leader and mentor to a group of talented freshmen and sophomores, with a huge crowd.

But when a reporter asked Neighbors about the future earlier this week, Neighbors lit up and couldn’t help but smile about where his program sits right now and what it is poised to do in the coming years.

Add Scott to current freshman Jersey Wolfenbarger, Sasha Goforth, Elauna Eaton and Dauda and the Arkansas women would have at least five 5-star prospects on its roster in the 2023-24 season as well as several four-star performers.

“You don’t look at it a whole lot, but there are times that you do, “ Neighbors said. “Anybody who says we don’t look at the future is just lying to you and you know that.

“When I am updating our potential team two or three years down the line, we have to because that is what determines our schedule. So I guess I will put it this way - two years from now we will play anbody in the country at anytime and anywhere. I don’t care.”

Neighbors provided an example with assistant coach Todd Schaefer coming to him about future scheduling.

“Todd could walk in and say you want to play at UConn on Thursday and then go across the country and play Stanford on Friday and I’ll say, ‘Sure, let’s go,’” Neighbors said. “We are going to be at that point because of their depth, their age, their experience and their talent, how well they like each other and how well they fit together.”

Samara Spencer has been named the SEC’s Freshman of the Week four times. Add Spencer to Emrie Ellis, Goforth, Eaton, Ashlyn Sage and Rylee Langerman as underclassman that have all played significant minutes this season.

“I don’t have a problem embracing that fact that in two or three years we are going to be really good,” Neighbors said. “Again you are balancing that with who other rosters lose. LSU is going to be a completely different team. Now she (LSU head coach Kim Mulkey) may bring in a bunch of freshman and a bunch of transfers and talent that I don’t know of.

“But with what everybody has as of today across the country and you look at how many minutes our freshmen have played, it gets pretty exciting to know. There are probably equal rosters around, but not one that I would argue with you too long that ours doesn’t need to be talked about. It is exciting.”