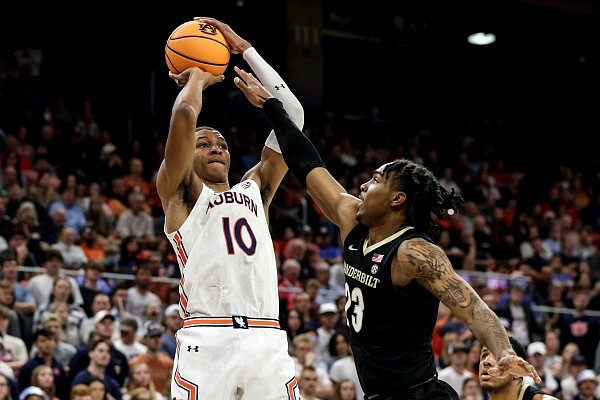 Auburn forward Jabari Smith shoots a 3-pointer over Vanderbilt guard Jamaine Mann during the second half of an NCAA college basketball game Wednesday, Feb. 16, 2022, in Auburn, Ala. (AP Photo/Butch Dill)

Two of those SEC top 16 seeds lost on Saturday, with No. 2 Auburn falling 63-62 at Florida and No. 13 Tennessee dropping an offensively challenged 58-48 game at No. 23 Arkansas.

Auburn was listed as a 1 seed along with Gonzaga, Arizona and Kansas. Kentucky made the 2 line along with Baylor, Duke and Purdue. The Volunteers were considered a 3 seed by the committee, along with Illinois, Texas Tech and Villanova. The 4 seeds were Texas, UCLA, Providence and Wisconsin.

USA Today’s Monday bracket had Arkansas as a 5 seed, the Razorbacks’ highest projection of the season. Arkansas joined 1 seed Auburn, 2 seed Kentucky, 3 seed Tennessee, 5 seed Alabama, and 6 seed LSU on USA Today’s latest bracket, which did not include Florida.

The Gators were a “next four out” designation for ESPN.com’s Joe Lunardi in his bracket pick from last Friday. At that time, Lunardi had these SEC projections: 1 seed Auburn, 2 seed Kentucky, 4 seed Tennessee, 5 seed Alabama, and 6 seeds Arkansas and LSU.

Tennessee Coach Rick Barnes said after Saturday’s 58-48 loss at Arkansas he questioned some of the block-charge calls that went the Razorbacks’ way, but he hoped a film review would prove him wrong.

At his Monday news conference previewing the Vols’ 6 p.m. game at Missouri today, the first two questions Barnes got revolved around officiating, starting with a reporter asking if the film review did change his mind.

“Not really, I felt pretty much the same after watching it,” Barnes said. “But what I can tell you is that … it’s a hard game to officiate. Some games you feel — you don’t feel, you know — that maybe those tough calls go your way and at other times it all evens out.

“I don’t think there’s a conference in the country that has made more of a commitment to continue to improve our officials from top to bottom.”

Arkansas forward Jaylin Williams drew four charges against the Volunteers, whose guards were in foul trouble much of the game.

“I can tell you this, when I came into this league seven years ago, it was about as bad as you could imagine,” Barnes said. “Where we have grown to … you know it’s gonna get there.”

Barnes was also asked if block-charge calls should lean toward favoring the offense.

“Yeah, I would say that,” Barnes said. “I think if you go in the air you ought to err to the offensive side on it.”

Kentucky downed Alabama 90-81 while playing without point guards Sahvir Wheeler and TyTy Washington and after falling behind 44-32 late in the first half.

Washington has been dealing with a leg injury he first suffered against Florida on Feb. 12. He tried to play in last Tuesday’s 76-63 loss at Tennessee but limped to the sideline early in the second half. Wheeler was seen grabbing his wrist at the end of the Tennessee game.

Coach John Calipari said the Wildcats might go another week without Washington and Wheeler, which would put their status in question for a Saturday showdown at Arkansas.

“They may be out another couple of games,” Calipari said on Saturday. “I need them healthy before March. We don’t need them to play hurt. If we don’t win a game because they’re not there, then we don’t win the game.”

“Just so you know, we have prepared for both Kelland and Devion to be point guards because we’ve done it in practice,” Calipari said. “I keep saying, I like my team. There are good teams out there but I’m taking this one.”

The Kentucky starters played all but nine minutes against Alabama.

Auburn had to deal with a “White Out” in its 80-76 overtime loss at Arkansas two weeks ago, and on Saturday they lost during a “Black Out” against a hungry Florida team.

Jacksonville native Tyree Appleby led the way with 26 points, his high with the Gators, that included 20 points in the second half on 4-of-6 shooting from three-point range.

Saturday’s slate of games seems primed to offer the best four teams in the conference going at it in a pair of day games.

The No. 18 Razorbacks host No. 6 Kentucky at 1 p.m. in the national CBS broadcast, and league-leading No. 3 Auburn travels to face No. 17 Tennessee at Thompson-Boling Arena in a 3 p.m. tipoff.

The four top teams have a minimum three-game lead over a quintet of teams who are bunched at 7-7 in SEC play in the race for the SEC Tournament’s advantageous double bye.

Pippen has 507 points and a 19.5 scoring average to lead the SEC over Notae’s 482 points and 18.5 average and Molinar’s 493 points and 18.3 average. Notae has missed one game, the Razorbacks’ loss at Mississippi State to open SEC play.

Georgia’s Tom Crean has the most tenuous job security in the SEC with the Bulldogs poised to compile one of the worst seasons in SEC history.

The Bulldogs (6-21) need to win twice down the stretch to surpass Tennessee’s hapless 1993-94 squad for the fewest victories by an SEC team since the expansion in 1991-92 brought Arkansas and South Carolina into the league.

Georgia’s 1-13 SEC record could descend into one of the worst in conference history, with Vanderbilt’s 0-18 league run in 2018-19 the basement standard.

There had been winless conference seasons by Sewanee, Florida and a few others prior to and during World War II, but since then only Georgia Tech (0-14 in 1953-54) and Vanderbilt in 2018-19 had gone winless in conference play.

Only 12 SEC teams since the 1991-92 expansion have failed to win 10 games, excluding the covid-impacted season of 2020-21, when several teams lost multiple games due to cancellations and South Carolina, Texas A&M and Vanderbilt all won less than 10 games.

South Carolina leads the way with three such occurrences, followed by Missouri (2) and one each from Arkansas, Auburn, Georgia, LSU, Ole Miss, Tennessee and Vanderbilt.

The Florida athletic department was fined $50,000 by the SEC office after some fans stormed the court at the ExacTech Center following a dramatic 63-62 win over Auburn.

The fine represented a first offense for Florida under guidelines restructured by the SEC in 2015. The “access to playing field” violations call for a $25,000 on a first offense, $100,000 on a second offense and $250,000 for third and subsequent offenses.

The University of Arkansas was hit with the maximum fine after hundreds of fans rushed Bud Walton Arena following an 80-76 win over No. 1 Auburn on Feb. 8. The Razorbacks had previously been fined for two instances of storming the field at Reynolds Razorback Stadium: After a 17-0 win over LSU in 2014 and a 40-21 win over Texas last September.

Williams and Pippen split SEC Player of the Week honors. Williams, a sophomore from Fort Smith, averaged 13 points, 13.5 rebounds and 3 assists in wins over Missouri and Tennessee. Pippen, a junior from Los Angeles, averaged 26.5 points, 5.5 rebounds, 5.5 assists and 3.5 steals in games against Auburn and Texas A&M.

Smith, a 6-10, 220-pounder from Fayetteville, Ga., was named SEC Freshman of the Week after averaging 29.5 points, 5.5 rebounds and 2 assists in games against Vanderbilt and Florida.

The Razorbacks’ fortuitous Saturday home schedule produces another attendance/hype monster. Arkansas will hold a “Stripe Out” at Bud Walton Arena, following a victorious “White Out” win over No. 1 Auburn on Feb. 8 and a “Red Out” win over No. 13 Tennessee last Saturday. The Wildcats, a game out from Auburn for the SEC lead, are used to the road hype.

“You’re going to get low, we’re human. Our guys were as dejected in the locker room in College Station [Texas] the other night as I’ve ever seen … in a regular-season game. But then you’ve got to bounce back.” — Florida Coach Mike White after Saturday’s 63-62 win over then-No. 2 Auburn

“Our guys showed a lot of character putting themselves in position to win late. We just didn’t finish.” — Auburn Coach Bruce Pearl after the Tigers rallied from a 61-53 deficit with 2:16 remaining before falling 63-62

“I thought our six-minute game: Being solid on defense, making free throws and valuing the ball, would catch up to us. … We were shooting [free throws] so well early in the year to now we’re not even just adequate, we’re poor at the free-throw line. We’ve really regressed there.” – LSU Coach Will Wade after a 77-75 loss at South Carolina

14 – Consecutive home wins over Auburn for Florida after Saturday’s 63-62 decision over the No. 2 Tigers