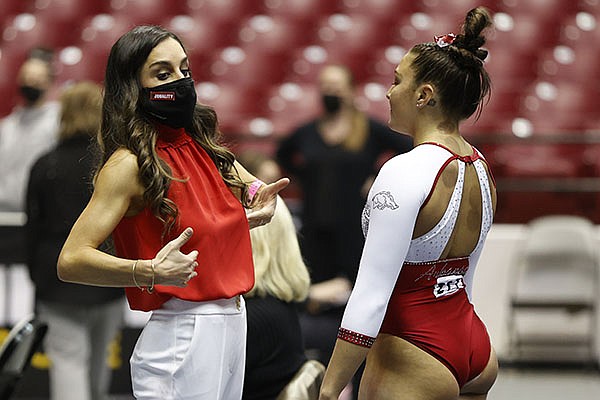 FAYETTEVILLE — The University of Arkansas gymnastics team hopes to ride a roster largely driven by seniors and freshmen to new heights this season under third-year Coach Jordyn Wieber.

The No. 11 Razorbacks open their season tonight at 7:30 against Ohio State at Barnhill Arena looking for strong performances from a big blend of veterans and newcomers. The meet had originally been scheduled for 6:45, but it was moved to the later time to accommodate a live broadcast on the SEC Network.

“We have this really interesting dynamic where we have a veteran team and a rookie team at the same time because our senior class has seven and our freshman class has six,” Wieber said. “I think the challenge is going to be how to structure our lineup. Because obviously those that have been here and competing in college gymnastics for a few years are really reliable. You know what to expect when you put them in the lineup. We still have to get that information from our freshmen.”

The Razorbacks had a breakout season with last year’s SEC-only schedule prior to nationals. Arkansas posted five 197s or better, more than half of the eight such scores the program had produced in its first 18 years of existence, including a school record 197.425 in a win at Auburn.

Arkansas finished second in the NCAA Tuscaloosa Regional semifinal with a 197.25, then third in the regional final, one spot shy of qualifying for the eight-team NCAA Championships.

Kennedy Hambrick and Maggie O’Hara, All-Americans in the all-around and uneven bars, respectively, are back to lead the massive senior class.

Hambrick broke the school record in the all-around last season with a 39.75 in a win over Missouri. The Pearland, Texas, native also had a 39.7 in the win at Auburn, giving her two of the top three all-around scores in school history.

O’Hara was a huge boost to the lineup as a transfer from Michigan in 2020. She was a second-team All-American on bars in the regular season, the first Razorback to achieve that honor, and a first-teamer in the postseason with a 9.925 at the NCAA Championships.

“It’s going to be I think a good mix of the rookies and veterans,” Wieber said. “We’ll obviously see a lot of Leah Smith and ‘Mackey’ Sedlacek and Kalyxta Gamiao. So you’re going to see a lot of freshmen presence and I think towards the end of the lineup you’ll see some of those older ones anchoring it out and being that reliable finisher for our lineup.”

Smith, a native of Spring, Texas, won the 2021 Nastia Liukin Cup with a huge floor routine. She was also second at the 2021 junior national championships with a first place on the floor and a second place in the all-around competition.

Wieber suggested up to half of the Razorbacks’ 24 routines could be competed by freshmen in the early going and possibly more later in the year.

Lovett is coming off elbow surgery and has increased her leadership role to join O’Hara and Shaffer as the most vocal team leaders.

“She’s not quite 100% but she’s feeling really good though,” Wieber said of Lovett just prior to the Christmas break. “She had massive elbow surgery back in the spring. … Right now she’s fully back on beam and she’s almost fully back on floor. We have a question mark on whether she’s going to be back on bars this season.”

A powerhouse on the floor exercise and balance beam last season, the Razorbacks have added difficulty on all events, but particularly on the vault and the floor, Wieber said.

“The one event that comes to mind is vault,” she said. “Right now we have three 10.0 start values that we’re planning to compete the first meet. We have more athletes who are capable of having 10.0 start values. … We’re jumping higher, we’re landing stronger, which is great.

“We’ve always been a great floor team but our difficulty level on floor this year will increase. We have nearly our entire lineup doing ‘E’ passes, which is really good.”

Ohio State, led by fifth-year Coach Meredith Paulicivic, is coming off a fourth-place finish in an NCAA Morgantown (W.Va.) Regional final with a 195.625 that followed a 196.525 in the semifinals.

RANKINGS Arkansas is No. 11 in WCGA coaches poll