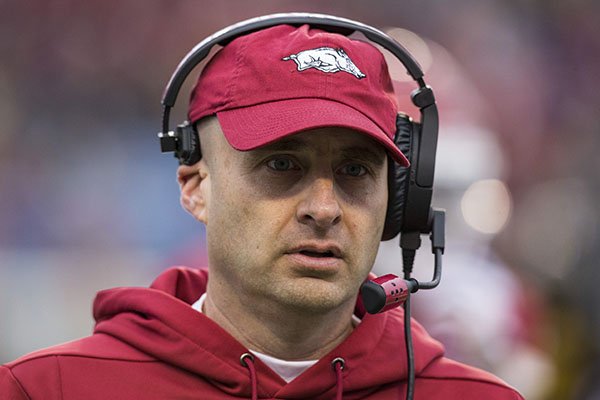 Arkansas interim head coach Barry Lunney Jr. is shown during a game against Missouri on Friday, Nov. 29, 2019, in Little Rock.

Former Arkansas player and coach Barry Lunney Jr. was hired as offensive coordinator and quarterbacks coach at Illinois on Saturday.

Lunney, 47, spent the past two seasons as offensive coordinator at Texas-San Antonio. At Illinois he will be reunited with Bret Bielema, the Fighting Illini’s head coach who hired Lunney at Arkansas prior to the 2013 season.

"I'm thankful and excited for the opportunity to join Coach Bielema at the University of Illinois," Lunney said in a press release announcing the hire. "Coach B is one of the most respected coaches in college football and I look forward to building on the foundation that he set during his first year in Champaign. The opportunity to work with Coach B again after spending five years together was one that I could not pass up.

“I’d also like to thank Coach Jeff Traylor, the UTSA coaching staff, and student-athletes for two great years in San Antonio, including a conference championship and top-25 national ranking. I look forward to the new challenge ahead as we build a championship football program at Illinois."

Lunney spent seven seasons as tight ends coach at Arkansas, coaching under Bielema for five seasons and under Chad Morris for two seasons. Lunney was promoted to interim head coach after Morris was fired with two games remaining in the 2019 season. The Razorbacks lost both games.

"I am so excited to bring Barry Lunney to the University of Illinois family and put him in a position to lead our offense," Bielema said in a statement. "He has had success at every level he has coached and has a system that will help take our offense to a new level of success. He is a great teacher, communicator, and leader that our staff and players will gravitate to. His wife Janelle and family will be a great addition to our campus and community."

Lunney coached under his father, Arkansas high school legend Barry Lunney Sr., for eight seasons at Bentonville High School in between stints in college football. The Tigers won two state championships and were twice state runner-up during that time.

Lunney also won a state championship as a player under his father at Fort Smith Southside in 1991.

Lunney was the Razorbacks’ starting quarterback for four seasons from 1992-95 and was also a pitcher for Arkansas’ baseball team. After a brief stint in Minor League Baseball, Lunney began his coaching career as a graduate assistant under Houston Nutt at Arkansas from 1998-99. His first full-time job was as a position coach at Tulsa from 2000-02.

Illinois was 5-7 overall and 4-5 in Big Ten play in Bielema’s inaugural season in 2021. Bielema fired Tony Petersen as the team’s offensive coordinator following the season.