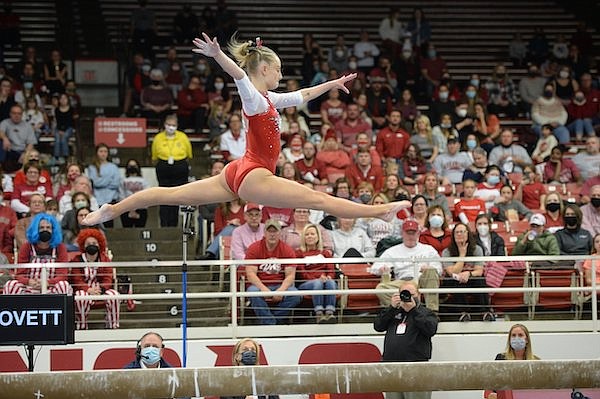 Arkansas' Bailey Lovett competes in the beam portion of the Razorbacks' meet with Ohio State on Friday, Jan. 7, 2022, in Fayetteville.

FAYETTEVILLE — Bailey Lovett capped a big finish for the University of Arkansas on the floor exercise with a meet-high 9.875 as the Razorbacks held off Ohio State in a shaky season opener at Barnhill Arena.

The No. 11 Razorbacks, with several key gymnasts missing due to medical issues — including covid — notched a 195.45 to 195.025 win over the No. 22 Buckeyes, who also had multiple contributors held out of the meet.

The Razorbacks, who won their first season opener since 2014, did not decide until Thursday morning they had enough healthy athletes to fill out their lineups.

“I’m really proud of the team,” third-year Arkansas Coach Jordyn Wieber said. “We’ve handled a lot of stress and a lot of unknowns. We weren’t sure we were going to even have a meet at first.

“So to be able to handle all of that and come out and have a decent first meet, it obviously wasn’t where we wanted to be. We wanted to be in the 196 range on this first one, which I think we’re capable of.”

The final four Razorbacks all scored 9.8 or better on the finishing floor exercise, starting with junior Madison Hickey’s 9.8, followed by freshman Maddie Jones’ 9.8, senior Kennedy Hambrick’s 9.85 and the event-winning performance from the senior Lovett, who is coming off major elbow surgery.

“I was really kind of emotional and proud when Bailey did her routine,” Wieber said. “Most people don’t know she had a really intense elbow surgery and we weren’t sure if she was going to be able to compete at all this year.

“To do that and land her double layout and stick it with a huge grin on her face and to light the crowd on fire was really, really special. I’m really proud of that.”

The judging was tight. Neither team was awarded a 9.9.

Hambrick, a returning All-American for her fifth-place finish in the all-around at the NCAAs, won the all-around as the only performer in the event with a 39.35. Her night included 9.8s or better on every event.

Lovett bounced back from a balance beam effort in which the judges gave her a major deduction and a 9.2 score for not connecting two elements, which SEC Network analyst Bridget Sloan, the former Florida All-American, said on the broadcast she would have awarded.

The Razorbacks were missing as many as nine routines, while the Buckeyes were without their entire normal vault lineup, according to the SEC Network broadcast.

Arkansas did not have a sharp vault rotation to open the meet, but the Razorbacks still led by 0.9 points as Ohio State had an even wobblier start.

The Buckeyes had two falls on the uneven parallel bars, with their leadoff Zoe Schweitzer and anchor Kaitlyn Grimes having the major deductions, leading to an unsightly 48.175.

However, the Razorbacks turned around on the second rotation and also had two falls on the bars, with Jensen Scalzo and Sarah Shaffer coming off the apparatus. Arkansas had to count one of the falls, wound up with a 48.225 and its lead fell to just 0.15 after two rotations.

Arkansas rebounded on the balance beam, a stronghold of last year’s team, with four athletes hitting 9.8 or better. The trio of Amanda Elswick, Mackenzie Sedlacek and Hambrick all posted 9.825, and Shaffer notched a clutch 9.8. Kiara Gianfagna had a 9.775 on the beam.

The meet marked the debut of Arkansas sophomore Emma Kelley, the daughter of gold medalist Mary Lou Retton from the 1984 Olympic Games. Kelley led off the vault, uneven bars and floor exercise and had a 9.8 in the first rotation and a counting 9.65 on the bars before a fall on the floor.