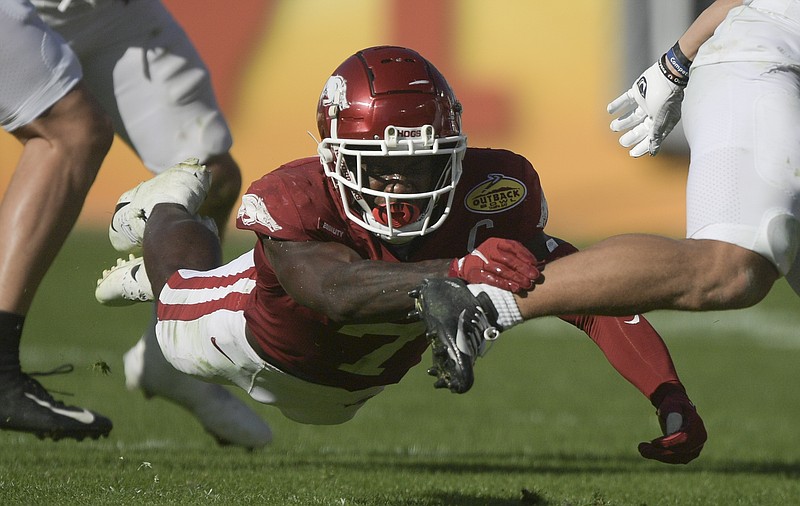 Arkansas safety Joe Foucha dives to make a tackle during the Razorbacks' 24-10 win over Penn State in the Outback Bowl on Saturday, Jan. 1, 2022, in Tampa, Fla.

FAYETTEVILLE — Safety Joe Foucha, a senior team captain for the University of Arkansas this season, posted on his Twitter account Tuesday that he’s committed to LSU — the Razorbacks’ SEC West rival.

Foucha, taking advantage of the extra season of eligibility granted to players by the NCAA because of the coronavirus pandemic, entered the transfer portal shortly after Arkansas’ 24-10 victory over Penn State in the Outback Bowl.

Foucha, from New Orleans, included "COMING HOME!” in his tweet with a photo of himself wearing an Arkansas uniform on one side of his body and an LSU uniform on the other side.

Foucha started all 13 games this season and had 75 tackles, including 7.5 for losses totaling 27 yards. His lone interception came in the Outback Bowl in the fourth quarter when Penn State was driving to try to pull within a touchdown. He picked off a Sean Clifford pass in the corner of the end zone.

For his Arkansas career, Foucha played in 44 games with 34 starts, made 233 tackles and had 4 interceptions.

LSU is scheduled to play at Arkansas on Nov. 12 during the 2022 season.