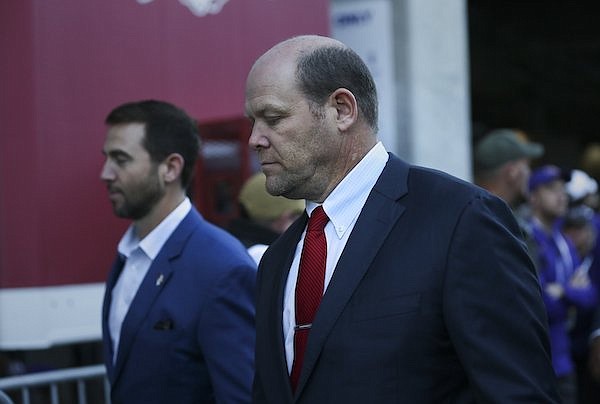 FAYETTEVILLE — The University of Arkansas’ football staff earned $447,917 in bonuses for the Razorbacks’ appearance in the Outback Bowl.

Head coach Sam Pittman received $150,000 for Arkansas making a bowl game that is classified as “Tier 2” in his contract. The Razorbacks’ 10 on-field assistant coaches were paid an amount equal to one month of their pay for a total of $297,917, according to UA figures.

Coordinators Barry Odom and Kendal Briles receive funds from the Razorback Foundation in addition to their UA pay. The foundation portion of their salaries did not count toward their bowl bonuses, which were an estimated $41,666.67 apiece.

Kennedy’s annual pay was increased by $100,000 to $400,000 last July after he was reassigned from tight ends coach. The pay raise, which was previously unreported, was discovered through a Freedom of Information Act request while researching bowl bonuses.

Kennedy was a semifinalist for the Broyles Award in his first season to coach the offensive line.

Bonuses were tied only to the Razorbacks being invited to a bowl game. No coaches received a bonus for Arkansas winning the game over Penn State, 24-10.

The bonuses were a 27.5% increase from when Arkansas head coach Bret Bielema and his nine-member staff were paid an estimated $390,416 for the Razorbacks' most recent bowl game, a loss to Virginia Tech in the 2016 Belk Bowl.

The NCAA allowed football teams to hire a 10th assistant coach beginning with the 2018 season.

The Razorbacks’ 10 assistants were in line for $5.325 million in combined salary during the 2021 season, which was a program record for a single season.