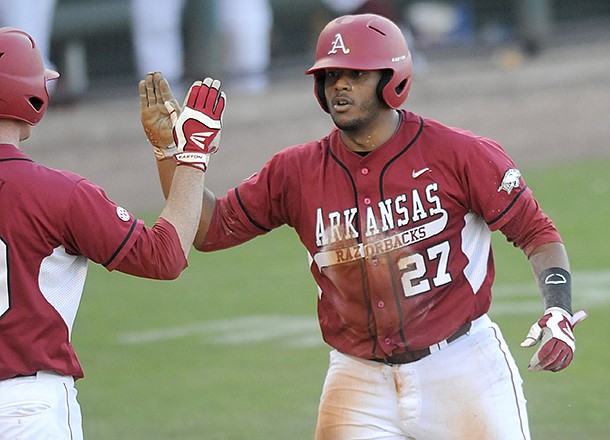 Arkansas catcher Jean Ramirez is congratulated by teammate Matt Vinson after scoring a run in the fifth inning of a 4-1 win over LSU at the SEC Tournament on Thursday, May 23, 2013, in Hoover, Ala.

Ramirez, 28, was a bullpen catcher for the Rays the past three seasons.

The Rays did not provide information about the cause of Ramirez’s death. Erik Neander, the club’s baseball operations president, called his death “unexpected.”

The Tampa Bay Times reported Ramirez died in Fort Worth, Texas, where he attended high school. Ramirez was born in Puerto Rico.

Ramirez signed with Arkansas out of Boswell High School in 2010 and redshirted on the Razorbacks’ College World Series team in 2012. He played in 16 games with nine starts at catcher in 2013.

“The entire Razorback baseball family is heartbroken by Jean’s passing,” Arkansas coach Dave Van Horn said in a statement. “We offer our deepest condolences to his loved ones during this difficult time. Jean will be missed.”

Some of Ramirez’s former teammates at Arkansas reacted to the news via social media.

“RIP to Jean and prayers with his family,” wrote Colin Poche, who pitched for the Razorbacks from 2013-14 and made 51 relief appearances for the Rays in 2019. “From being teammates at Arkansas and again with the Rays, I can’t say enough good words about Jean and the kindness he showed to other people. He was such a great friend and his presence will truly be missed.”

Tyler Spoon, an Arkansas outfielder from 2012-15, wrote on Twitter that Ramirez was “one of the nicest and most genuine people I was fortunate enough to cross paths with. He never had a bad day and he was always one of those guys you loved to be around. You will be greatly missed brother.”

With starting catcher Jake Wise sidelined due to an elbow injury that eventually required Tommy John surgery, Ramirez started the final two games he played for the Razorbacks during the 2013 NCAA regional at Kansas State. He also started twice that year at the SEC Tournament.

Ramirez batted .172 with 1 RBI in 2013. He transferred to Grayson (Texas) Community College that summer after Wise went undrafted and opted to return to the Razorbacks’ program.

Ramirez finished his collegiate career at Illinois State and was drafted by the Rays in the 28th round of the 2016 MLB Draft. He spent three seasons in the Rays’ minor league system before he was released in 2018.

He joined the Rays’ big-league team as a bullpen catcher for the 2019 season and told The Athletic that year he hoped to eventually become a manager, bench coach or coordinator for a team in MLB.

“Jean was an incredible teammate and friend,” Rays manager Kevin Cash said in a statement. “He brought so much passion and energy each day to our clubhouse and bullpen, and his love for the Rays and baseball was evident to all who interacted with him."

The Rays won the past two American League East championships and won the 2020 AL pennant. The 2020 World Series — which the Rays lost in six games to the Los Angeles Dodgers — was played in Arlington, Texas, just 30 miles from where Ramirez attended high school.

“Me being from around the area, people have been reaching out and saying how proud they are and how exciting of a moment this is, and I completely agree,” Ramirez told WTSP-TV during the 2020 World Series. “This is the best moment of my life.”