'He did wonderful': Wade a force in Hogs' 1st league win 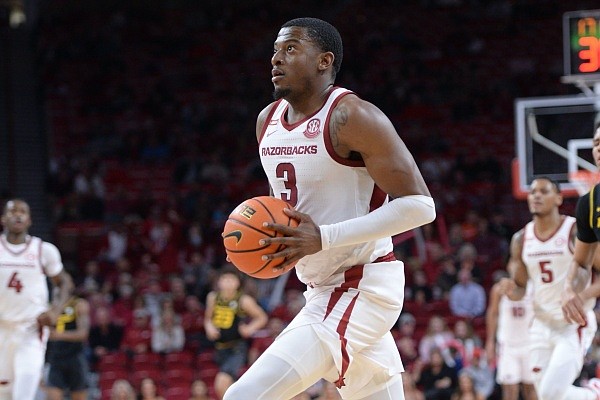 Arkansas forward Trey Wade prepares to dunk the ball on Wednesday, Jan. 12, 2022, Missouri during the second half of the Razorbacks’ 87-43 win in Bud Walton Arena in Fayetteville. Visit nwaonline.com/220113Daily/ for the photo gallery.

FAYETTEVILLE — The only thing that could slow Arkansas forward Trey Wade’s roll against Missouri on Wednesday was cramps in both of his calves.

Making his third start of the season, Wade hobbled off the floor with 36 seconds remaining in the first half and was immediately tended to by two support staffers.

When the Wichita State transfer was on the floor, Missouri was able to provide only minimal resistance and, defensively, he greatly impacted Arkansas’ 87-43 victory — the Razorbacks' first in SEC play.

“That usually happens to me when I don’t play the minutes that I’m used to playing,” Wade said of his cramps. “But it’s just getting back in the flow of things, and it’s day-by-day. I’m all right. I’ll be ready for next game.”

When Wade exited the game late in the half, his fingerprints were already all over the Razorbacks’ 47-15 lead. Arkansas led 49-15 at halftime.

The Razorbacks were plus-26 in his 16 first-half minutes. Wade recorded a season-high 12 points by halftime to go with 2 rebounds, 1 assist, 2 blocks and 2 steals.

After recovering from his cramps, he picked up where he left off and finished the night — the best in his time at Arkansas — with 17 points on 7 of 10 shooting, 5 rebounds, 3 assists, 2 blocks and 3 steals.

It was his best scoring performance since a 23-point outing for Wichita State against Tulane on March 3, 2021.

“It’s doing everything to help our team win,” Wade said. “I have the ability to do that and that’s what I tried to do tonight....I just wanted to come out there and play the right way. I know we needed a win tonight.

“The biggest thing was just play ball and play hard and play smarter than the other team.”

Among the 6-6 forward’s offensive highlights were a tip-slam following a missed midrange jumper by JD Notae; a three-pointer assisted by Jaylin Williams to put Arkansas up 14-3 early; a right short-corner jumper to extend the lead to 21; and an and-1 with 2:49 to go in the first half.

His final shot of the game was a smooth, long two-point jumper from the left corner. Wade’s six buckets inside the arc are the most in a game in his college career.

But as much punch as he gifted the Razorbacks’ offense, an argument can be made he was even better on the defensive end as he helped Arkansas limit Missouri to 29.2% shooting for the game and 12% (3 of 25) in the first half.

Wade’s three steals matched a career high, and two immediately led to scores for the Razorbacks. His second steal resulted in a Davonte Davis dunk to put Arkansas up 26-3, and his final came on a Tigers sideline out-of-bounds play.

Moments later, he threw down a two-handed dunk.

Wade also had a 30-second sequence in the first half during which he blocked a shot, assisted on an Au’Diese Toney layup then blocked another Missouri shot on the interior.

Arkansas coach Eric Musselman was ecstatic with with the all-around effort shown.

“He’s an active defender who can guard, really, probably all five positions. He guarded (Kobe) Brown some tonight,” Musselman said. “Trey has a unique ability to block shots and also contain dribble-drives. And he has quick hands, as well, and he’s our best box-out player, boxing guys off the offensive boards.

“He might not always get defensive rebounds, but he does do a great job of blocking his guy out, which is important, too.”

Mizzou players finished 1 of 10 from the floor when Wade was the nearest defender to the shot. In SEC play, opponents are 3 of 17 shooting when defended by Wade, including 3 of 12 inside the arc.

"He did wonderful,” Davis said.