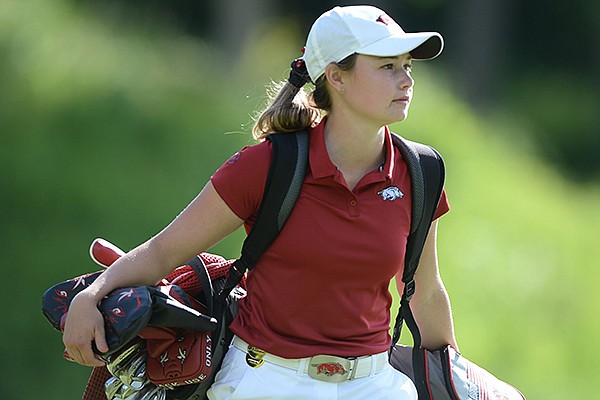 FAYETTEVILLE — Rogers native and fifth-year University of Arkansas golfer Brooke Matthews announced Friday she had made the decision to turn pro and forego her final spring with the Razorbacks.

Matthews, coming off two of the strongest seasons by a Razorback golfer, qualified for her LPGA Tour card last month with a 7-under score and a tie for 30th at the LPGA Q-Series in Dothan, Ala.

Matthews, a first-team All-SEC performer with four career wins, captured the Cougar Classic last fall with an NCAA-record 25-under, shooting 63-64-64 at the event outside Charleston, S.C. She also took medalist honors at the first two Blessings Collegiate Invitational events at Blessings Golf Club in Johnson and tied for first at the Liz Murphey Collegiate Classic in 2019.

“These past 4 1/2 years have been the best of my life,” Matthews said on a video posted to social media. “They have been made the best by my coaches, teammates, support staff and all the Hog fans who make Arkansas a place where student-athletes can succeed. My dream was always to wear the Razorback logo and represent this great school.

“Realizing that dream exceeded every expectation I ever had. … Though I no longer will play for the Hogs, I promise wherever my career takes me I will always represent this state and this school, that have both given me so much. Thank you, Razorback Nation.”

Fassi and Lewis were both NCAA individual champions.

Matthews’ last season has been highlighted by appearances at the Augusta National Women’s Amateur, the Arnold Palmer Cup and the Curtis Cup, where she helped Team USA pull off a dramatic comeback win.