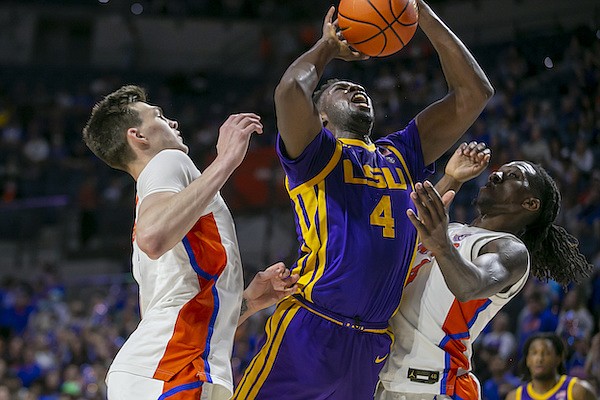 FAYETTEVILLE — On Tigers this week the Razorbacks continue trying to change their stripes.

Against the Missouri Tigers on Wednesday night at Walton Arena, Arkansas’ reeling Razorbacks, off a 0-3 SEC start, posted an unfathomably effective 49-15 first half en route to romping, 87-43.

Tales of these Tigers spin differently.

Missouri’s Tigers have been embarrassed much of their so-far 7-8 season. But last Saturday in Columbia, Mo., they merited national attention upsetting then-No. 15 Alabama.

The Tide feather in Mizzou’s cap just further captured Arkansas’ angry eyes. Their season skidding toward the brink and Coach Eric Musselman in shoulder pain for what Thursday required surgery, the Razorbacks obviously felt compelled to prepare for Mizzou’s Tigers like they were NBA champs.

Even with pain persisting and surgery forthcoming, Musselman likely slept better Wednesday night than since tearing his rotator cuff during a December collision in practice.

“I think tonight we played as hard as any college team could play for 40 minutes,” Musselman said postgame. “Nobody can play harder than what we did tonight for 40 minutes.”

It’s a different tale on the Tigers besetting Arkansas today in Baton Rouge. Coach Will Wade’s LSU Tigers (15-1, 3-1) rank 12th in the country.

Only nationally No. 4 Auburn at home has beaten LSU, which otherwise in the SEC beat Kentucky, Tennessee and Florida.

And like Mizzou’s stunner over Alabama capturing Arkansas’ attention, Arkansas’ 87-43 score over Mizzou no doubt has been underscored by Wade.

Though head coaching his first college game, Smart should be more than up to it. The former Indiana Hoosiers star coached pro ball for 22 years. He NBA head coached Cleveland, Golden State and Sacramento.

Having both played for Musselman as a pro and assisting as a coach when Musselman head coached Golden State, Smart said he knows what Musselman expects and has his respect to adjust plans as necessary.

“I shared with the team that I’m going to do everything I can to stay close to the vest with how we’ve been doing things,” Smart said. “But I’ve got to coach in my style and my personality. I talked with Coach about that and he said, ‘Just do what you need to do and keep preparing this team to get ready to play a game.”