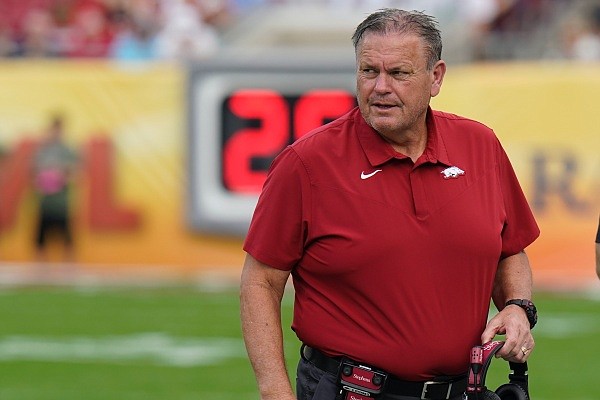 Former Alabama linebacker Drew Sanders was the first to announce he was transferring to Arkansas in the afternoon.

Sanders, 6-5, 244 pounds, entered the NCAA transfer portal on Jan. 11, one day after the Crimson Tide lost to Georgia in the College Football Playoff Championship Game. He started three games in two seasons and had 33 tackles, 2.5 tackles for loss and 1 sack.

Sanders signed with Alabama over Oklahoma, LSU, Georgia, Notre Dame, Oregon, Penn State and other programs out of Denton (Texas) Ryan High School. ESPN rated him a 4-star prospect, the No. 4 athlete and No. 36 overall prospect in the nation in the 2020 class.

He was selected to the Under Armour All-America Game. Sanders visited Arkansas on Wednesday afternoon and Thursday morning before visiting Oklahoma that afternoon and Texas on Friday.

Sanders was seen on campus Sunday and is expected to start classes on Tuesday. Linebackers coach Michael Scherer led the effort to get Sanders to Fayetteville.

Sanders’ best game came in a 31-29 victory over Florida in September 2021 when he recorded 6 tackles, 1 tackle for loss and 1 quarterback hurry.

The Razorbacks will lose two of their top linebackers from the 2021 roster, Grant Morgan and Hayden Henry, while linebacker Bumper Pool recently announced he plans to return for his fifth season.

McGlothern, 6-2, 186 pounds, of Spring (Texas) Klein Oak, entered the transfer portal Tuesday. He arrived in Fayetteville around noon Saturday for an official visit.

McGlothern was a sophomore at LSU in 2021 and has three seasons of eligibility remaining.

He was an ESPN 4-star prospect in the 2020 class and picked LSU over offers from Arkansas, Florida, Michigan, Southern Cal, Alabama, Ohio State, Oklahoma and other programs.

McGlothern started 6 games and played in 10 in 2021, and had 32 tackles, 2 tackles for loss, 1 interception and 5 pass breakups. He returned an interception 37 yards for a touchdown during the Tigers’ win over Florida.

McGlothern is the fourth player to transfer to the Razorbacks this offseason and second from LSU, joining defensive lineman Landon Jackson. The Razorbacks have also added transfer receiver Jadon Haselwood from Oklahoma and Sanders from Alabama.