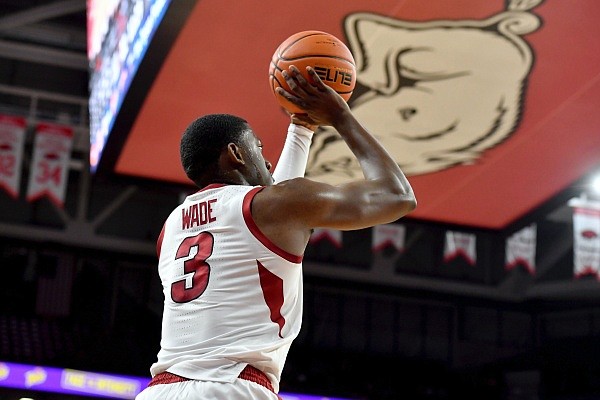 FAYETTEVILLE — An in-depth look at the Razorbacks and Gamecocks ahead of their matchup in Fayetteville on Tuesday:

The Razorbacks (12-5, 2-3 SEC) are in a far greater place — both mentally and in the SEC standings — today than they were one week ago, and they are looking to run their winning streak to three games in league play.

South Carolina is up first for Arkansas as it opens a two-game homestand and seven-game stretch in which it plays five times inside Bud Walton Arena. The Razorbacks are 9-1 in true home games this season.

There were understandable concerns about Arkansas’ defensive play after its 0-3 start in SEC play, but after a 2-0 week with wins over Missouri and then-No. 12 LSU, the Razorbacks enter Tuesday with the No. 3 defensive efficiency rating in conference games (94.7), according to KenPom data. Only the Tigers of Auburn and LSU have been better.

Arkansas has been especially effective in limiting opponents’ offensive rebounds and generating turnovers. League opponents have grabbed 27.4% of their misses against the Razorbacks (No. 2 in SEC), and 11.0% of their possessions have resulted in a non-steal turnover (No. 3 in SEC).

Senior guard JD Notae, who is averaging a team-best 21.3 points per game in four league games, ranks 10th in the SEC in steal percentage (3.9%), according to KenPom. The conference’s leader in percentage of shots taken (34.9%) has assisted on 25.4% of Arkansas’ scores when in the lineup.

He has scored 16-plus points in four consecutive games for the second time as a Razorback. Notae is 9 of 14 inside the three-point line in Arkansas’ last two wins.

Sophomore forward Jaylin Williams continued to climb the national ranks in terms of defensive rebound percentage after a strong effort at LSU in which he grabbed 12. He currently sits 13th in the country with a rate of 29.1% and No. 2 in the SEC at 33.4%.

Williams leads Arkansas with 44 defensive boards in five league games. Davonte Davis is second with 16. He enters play against South Carolina averaging 9.8 points and 10.2 rebounds per game in the SEC.

The Razorbacks, according to KenPom, rank third in conference games with an offensive rebound rate of 34.1%. Davis, Trey Wade and Au’Diese Toney each place in the top 21 in that category.

Williams and Stanley Umude, who has started three of the last four games, lead Arkansas in blocked shots since Dec. 29. Williams has seven and Umude five. Umude currently holds a block rate of 4.2%, his best mark since the 2019-20 season at South Dakota.

As a team, the Razorbacks posted an offensive rating of 109.6 and defensive rating of 72.8 in their wins last week, per CBB Analytics. Arkansas’ defense either came away with a steal or blocked a two-point attempt on 26.2% of opponents’ possessions.

No team in the SEC has struggled to score the basketball like the Gamecocks (10-6, 1-3 SEC) since league play got underway.

For the season, 12.9% of the Gamecocks’ offensive possessions have ended in a steal for their opponent. That figure ranks last among high-major programs and 351st nationally.

South Carolina began the season 8-2 with victories over the likes of Alabama-Birmingham (No. 43 on KenPom), Wofford (98) and Florida State (54). It has been a challenge to figure out since falling to Clemson (58) on the road on Dec. 18.

The Gamecocks have only two players — Erik Stevenson (11.3) and James Reese V (10.0) — averaging in double figures this season. But 5 other players contribute at least 6.2 points per game, and 13 average at least 10 minutes per outing.

Stevenson and Reese are the team’s top perimeter threats having knocked down 28 and 29 threes, respectively. Reese has connected on 38.2% of his attempts while Stevenson is 9 of 22 (40.9%) beyond the arc in SEC games.

He made 5 of 8 three-point looks and matched a season-high with 25 points in South Carolina’s 81-66 home loss to now-No. 2 Auburn on Jan. 4. Stevenson has scored 24 points in three games since.

Jacobi Wright, a 6-2 freshman guard, has an assist rate of 31.6% in conference play. It is the fifth-best figure in the league. He has finished with four or more assists in four of the team’s wins this season, including a season-high six against Georgetown.

Jermaine Couisnard, a 6-4 junior, is a big-game candidate offensively although he has not reached double figures in scoring since Nov. 28 against Rider. He has averaged 6.5 points in two career games against Arkansas.

Keyshawn Bryant is a high-flying wing looking to fall into a groove as well, but he has been inefficient (7 of 21 inside the arc) and a bit turnover prone in league games. Over 50 minutes, he has six turnovers and zero assists.

South Carolina can be stingy defensively. It holds the 40th-best defensive efficiency mark in the country (95.1), per KenPom, but opponents have attempted 4.27 free throws for every 10 field goals attempted. The Division-I average is 3.0.

“This kid can create off the dribble. He has a long-range game with his three-point (shooting). He can get to the basket. He’s very crafty off the dribble, so he has a chance to make plays and make shots. You’ve got to be careful with him, because as he’s running down the floor he can get his three-point game going. You’ve got to find him at all times.” — Arkansas interim head coach Keith Smart

• JD Notae is averaging 3.5 three-point attempts per game 25-plus feet from the rim in SEC play and knocking them down at a 50% clip, per CBB Analytics. He is 6 of 10 from the top of the key against league competition.

• After holding his matchup to 2 of 13 shooting last week, Stanley Umude has allowed just 7 scores on 34 field goal attempts since conference play began. Trey Wade held Missouri and LSU players to 3 of 18 shooting.

• Davis has 21 total rebounds in the last three games, second most on the team behind Williams, and 10 offensive rebounds. He did not grab his 10th offensive rebound in SEC play last season until Game 9.

• Chris Lykes has missed his last 10 three-point attempts dating back to the SEC opener at Mississippi State. Defensively, opponents have missed their last eight shots when defended by Lykes.