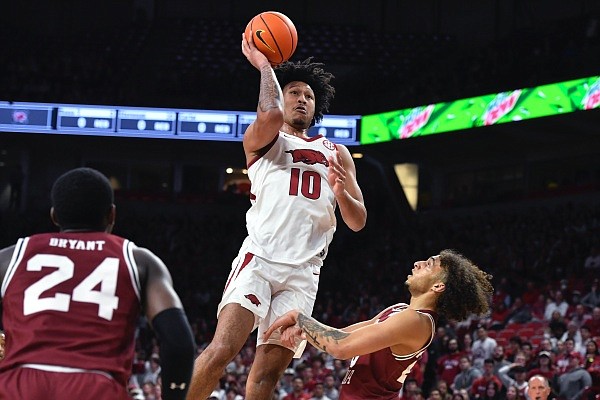 FAYETTEVILLE — Trey Wade pumped his right fist, stepped to stand over Jaylin Williams, then began playfully punching the sophomore forward between the Razorback logo and No. 10 on his chest.

All the while, Williams, who made a layup as South Carolina guard Devin Carter attempted to pull his right arm down, was lying on his back with both arms flexed, looking toward the rafters in Bud Walton Arena. Once on his feet, he flashed a smile.

In the team’s brief on-court huddle, joy jumped off the faces of teammates reveling in the moment right along with him.

The sequence, completed moments later with a shoulder shimmy and a made free throw, perfectly encapsulated not only another dazzling performance by Williams, but the stretch of high-quality basketball he has produced as Arkansas trends upward in SEC play.

His final line in the Razorbacks’ 75-59 victory over the Gamecocks on Tuesday: a career-high 19 points, 9 rebounds, 2 assists and 1 steal.

“He (was) such a vital factor early in the year. It was obviously the passing,” Arkansas coach Eric Musselman said. “It’s obviously always been the charge-taking and clogging up the middle for us, and being a force on the defensive backboards. Now he continues to make our offense run smoother. You saw that in the second half.

“His conditioning’s the best it’s ever been since I’ve been around him, so he’s able to play a full 20 minutes in the second half if we need that. And certainly his offensive game is starting to improve as well.”

Williams followed an outing at LSU last Saturday (11 points, 13 rebounds, 4 charges drawn, 3 steals) that could be talked about for years to come with one that is perhaps even better. That would have been difficult to imagine, but it could be that he is beginning to make his star turn.

In the Razorbacks’ last four games, Williams is averaging 13.3 points and 10.8 rebounds. His impact in that span has been undeniable, evidenced by Arkansas outscoring its opponents by 63 points in his 116 minutes.

Against South Carolina he showed a little bit of everything, from toughness and physicality to shot making and shot creation for others.

“When J-Will is more aggressive like he has been, it just makes us harder to guard, because he's shooting free throws, he's right at the rim finishing, he can play-make,” Arkansas guard JD Notae said. “I mean, it just makes him more dynamic.

“It makes our team more dynamic.”

Williams was aggressive offensively in attempting 11 shots and 10 free throws — both career highs. He made nine free throws.

Williams can also be in attack mode when sharing the basketball. And he was early in the second half as he helped Arkansas erase a 40-33 halftime deficit with a pair of assists in the opening five minutes.

It was a not-so-surprising response from the forward after being forced to watch the final 11:52 of the first half because of foul trouble.

Williams tied the team lead in defensive stops (7) and posted a team-best defensive rating of 82.1, according to StatBroadcast.

“I guess I'm just getting opportunities now,” Williams said of his offensive game. “I’ve always been the type of player just to do whatever the team needs me to do. And I guess the points have been one of the things that the team's been needing me to do these past couple games.

“I guess it's just been coming my way.”