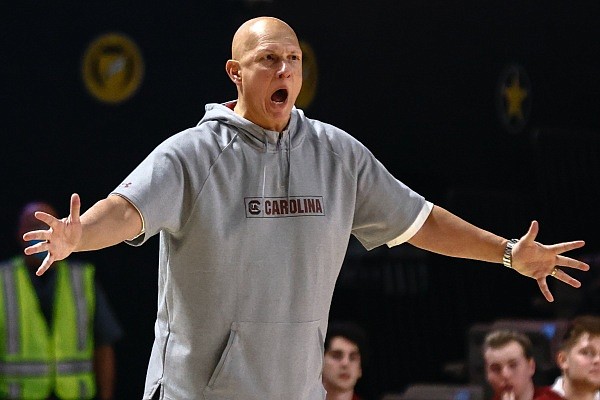 FAYETTEVILLE — Like most people who work in college basketball or are fans, South Carolina Coach Frank Martin knows Keith Smart for the last-second jump shot he hit to lift Indiana to a 74-73 victory over Syracuse for the 1987 national championship.

“I’ve met Keith. It’s not like Keith and I have ever gone to dinner together,” said Martin, whose Gamecocks play the Arkansas Razorbacks tonight. “I respect him tremendously.

“I mean, everyone remembers in college that shot, and then his career as a player and then his journey in coaching.”

Smart, an NBA head coach for Cleveland, Golden State and Sacramento, will face South Carolina as the University of Arkansas’ interim head coach.

In Smart’s first game filling in for Arkansas Coach Eric Musselman — who is recovering from shoulder surgery — the Razorbacks won 65-58 at No. 12 LSU on Saturday.

“I’m not surprised that Keith was able to lead them to a win against LSU,” Martin said. “Keith is one of those guys that’s really, really good for this game.”

Arkansas sophomore guard Davonte Davis had a dental implant procedure on Sunday after losing one of his front teeth taking a hard fall on the court at LSU when he was fouled from behind by Tari Eason on a dunk attempt with 35 seconds left in the first half.

Keith Smart, the Razorbacks’ interim coach, said Davis told him that he landed on his face rather than use his wrists to break the fall because he didn’t want them to take the brunt of the impact.

After coming out of the game and having JD Notae take his foul shots and hit both, Davis tried to get back on the court, but couldn’t because, by rule, a player who goes to the bench cannot return to the game without any time going off the clock.

Davis got back in the game with 18:44 left in the second half and finished with 7 points, 8 rebounds and 3 assists in 33 minutes.

Senior guard JD Notae is getting it done on offense and defense for the Razorbacks,

Notae, playing his second season at Arkansas after transferring from Jacksonville (Fla.) University and redshirting, is averaging 18.8 points to share the SEC lead with Vanderbilt’s Scotty Pippen Jr., and he leads the conference in steals with 2.6 per game.

“He’s been awesome,” South Carolina Coach Frank Frank Martin said. “That’s a credit to that staff when they identified him and brought him in, and the kind of confidence they’ve instilled in him.

“He’s a leader of their team, and he’s fun to watch on film. I’m sure he’s not going to be fun to watch in person [tonight].”

Playing at Arkansas could mean another tough shooting game for South Carolina considering that last week the Razorbacks held Missouri to 29.2% (14 of 48) and LSU to 38.2% (21 of 55).

“Arkansas is a team that relies on a lot of switching, a lot of aggression on the perimeter,” Gamecocks Coach Frank Martin said. “Our guys off the ball can’t jog cuts. There’s got to be a purpose with how we play. We can’t whiff on screens.

“And the guy with the ball can’t hold it. He’s got to be ready to shoot, pass, dribble, in that order.

“If you’re open, shoot it. If you’re not open, pass it. And if you can’t see the pass, then you’ve got to drive it to create a crack for somebody else or yourself.”

Back in Bud Walton

James Reese, a South Carolina senior guard who transferred from North Texas, is playing for the visiting team in Walton Arena for the third consecutive season.

The previous two seasons Reese played for the Mean Green against Arkansas. He had 4 points and 3 rebounds in 22 minutes when the Razorbacks won 66-43 two years ago and 5 points and 5 rebounds in 33 minutes in Arkansas’ 69-54 victory last season.