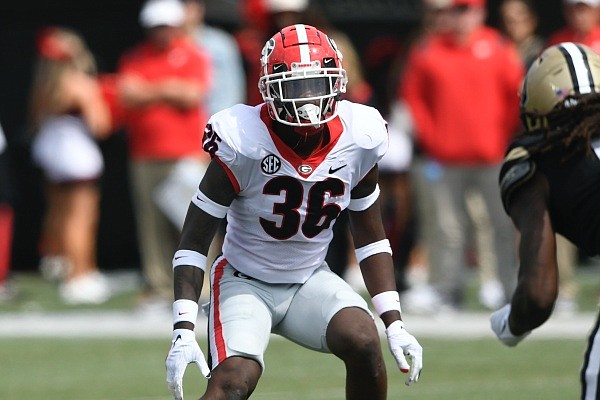 Arkansas' desire to acquire defensive talent for its 2022 roster continued the last couple of days with a visit from a player who soon will be wearing a national championship ring.

Georgia safety Latavious Brini (6-2, 210), who started 11 games for the Bulldogs and had 38 tackles and 8 pass breakups this past season, visited Arkansas on Tuesday and Wednesday.

“Coach Pittman is great coach and even a better person,” Brini said Wednesday at the conclusion of his visit. “He is always going to be there for his guys and make sure they are straight at all times.”

Brini, a former ESPN 3-star prospect and No. 42 cornerback in the nation in the 2017 class who played high school football at Hialeah (Fla). Mater Academy Charter, was impressed with what he found in Fayetteville.

Brini started and had 1 tackle in Georgia’s 38-0 win over visiting and then-No. 8 Arkansas on Oct. 2, but he sees a resurgence that allowed the Razorbacks to go 9-4 last season.

Brini got to experience the glory of a national championship when Georgia defeated Alabama 33-18 on Jan. 10 in the national title game.

“It was an unreal moment,” Brini said. “It was like a moment you will never forget and never have again. It was a really crazy moment.”

He will take a look at two or three other schools before deciding on his next destination by the end of this week or early next week.

“I am going to go visit Texas, Mississippi State and maybe Louisville, too,” Brini said. “That is kind of where I am in the process right now."

He does plan to be enrolled at a school for the second semester and go through spring practices.

Arkansas is hoping he will join its five transfer portal additions already enrolled.

A fifth-year player who was a back up to senior William Pool III the last four games of the season, Brini is looking to land at a program he can shine in his last season of college football.

Razorbacks defensive backs coach Sam Carter got across to him that Arkansas could be that place.