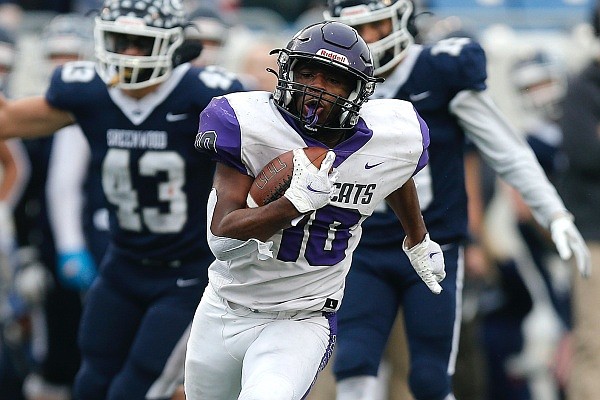 El Dorado running back Shadarioius Plummer (10) runs the ball during the fourth quarter of El Dorado's 27-17 win in the Class 6A state championship game on Saturday, Dec. 4, 2021, at War Memorial Stadium in Little Rock.

On Wednesdays we feature an in-state prospect who could be flying under the radar of college coaches. This week's UTR prospect is El Dorado’s Shadarious Plummer.

“He can obviously run the ball between the tackles. He’s good when he gets out in space, but also takes pride in pass pro. He has good vision and he does a good job of making one cut and getting north and south and getting as many yards as he can. He was the MVP of the state championship game.

"He has the best running backs coach in Arkansas in DeAnthony Curtis. He’s learned a lot from him. DeAnthony has done a good job of taking a guy that didn’t have a lot of experience at that spot and turning him into an elite player.

"We’ve sent his film out to a number of schools from the Division-I level to Division II. So far we’ve received good feedback.”