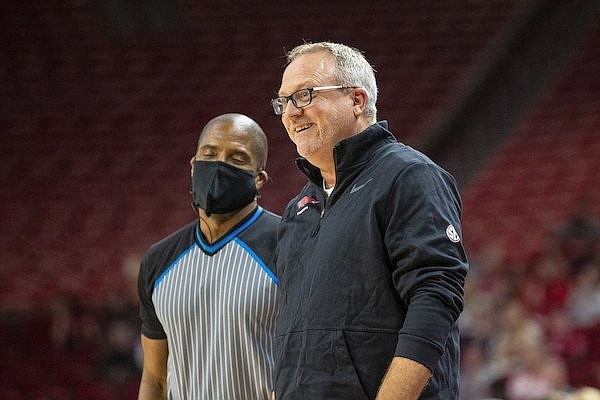 Arkansas coach Mike Neighbors is shown during a game against California on Sunday, Dec. 5, 2021, in Fayetteville.

The University of Arkansas women’s basketball team shot a blistering 59% from the floor and hit 15 three-pointers to cruise past Alabama 99-71 on Thursday night at Coleman Coliseum.

Arkansas Coach Mike Neighbors said he couldn’t have been more pleased with the team’s effort.

“Obviously our most complete effort of the SEC season, I think,” Neighbors said. “To shoot 60%, to really defend … just overall ecstatic with our team.”

He also credited Ramirez, the lone senior on the roster, with speaking up about making a position change. It involved putting her in the “dragon” or trailer spot in the offense. Neighbors said it worked wonderfully and made the Razorbacks even faster.

“We got it [the ball] out faster,” Neighbors said. “I think it opened up our driving lanes. I just told Amber, ‘I wished you’d brought it up earlier in the season.’ We kind of kept it quiet. We’ve been working on it a couple days.

The Razorbacks hit their season-high in points, made 15 of 29 (51.7%) from three-point range and 38 of 64 (59.4%) from the field to dominate the Crimson Tide. It was Arkansas’ fifth straight win over Alabama and its ninth consecutive win at Tuscaloosa.

Brittany Davis’ three-pointer got Alabama within 51-38, but Daniels answered right back with a three and Arkansas was in command, leading 70-45 after three quarters.

JaMya Mingo Young led all scorers with 22 points for Alabama, while Davis added 20, including five three-pointers. Alabama hit 10 three-pointers in the game.

Erynn Barnum saw her first game action for the Razorbacks since Dec. 5 because of a knee injury. But the junior looked to be good to go as she ran the floor well for a layup and a 65-41 lead for the Razorbacks late in the third quarter. She finished with 8 points, 4 rebounds, an assist and a steal in 10 minutes.

Neighbors said that was the type of minutes he was looking for from Barnum.

“She’s not ready to play game-type minutes,” Neighbors said. “She played three minutes at a time. That was valuable. I think it allows Jersey to play a little bit fresher and I think Jersey had her best game of the SEC. Obviously Sam did as well.”

Alabama was missing four significant contributors in Sunday’s loss to Florida because of health and safety protocols, including starting guard Hannah Barber. But they were all back for Arkansas. However, Megan Abrams, the Crimson Tide’s second-leading scorer, was not available Thursday.

Ramirez was 5 of 5 from the floor, scoring a game-high 13 in the first half to help the Razorbacks to a 44-27 halftime lead. Arkansas also hit 7 of 14 from beyond the three-point arc in the first half.

Arkansas used a 15-5 spurt to end the half, including seven by Ramirez. Rylee Langerman’s three-pointer from the corner danced on the rim but went down to end the run.

Alabama scored five straight to start the second quarter to get within 21-16, but Arkansas responded. The Razorbacks put together a 7-0 spurt to regain control, 29-18 with 4:39 left before halftime.

Arkansas used a 19-3 run to grab a 21-11 lead after a quarter. Alabama went scoreless for more than five minutes late in the quarter as the Razorbacks took control. Ramirez hit two three-pointers to fuel the run.

The Razorbacks are scheduled to host Mississippi State on Sunday at Walton Arena in Fayetteville. Tip-off is slated for 3 p.m. The game will be televised on the SEC Network.