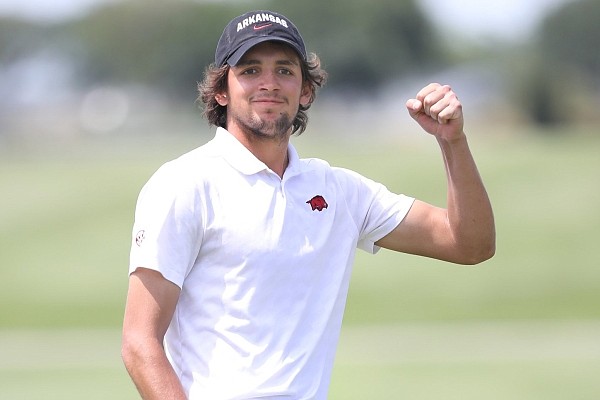 Arkansas’ Segundo Oliva Pinto shot a 2-under 68 on Friday and finished at 6-under 204 to win medalist honors at the SEC Men’s Golf Championships in St. Simons Island, Ga. (University of Georgia/Steven Colquitt)

Segundo Oliva Pinto led a group of four University of Arkansas golfers in the top 11 after the opening round of the Latin America Amateur Championship on Thursday.

Playing in the afternoon groupings, Oliva Pinto fired a 6-under 66 on the seaside Teeth of the Dog Course at the Casa de Campo Resort in the Dominican Republic. Oliva Pinto, of Argentina, is tied with Roberto Nieves of Puerto Rico on the 7,048-yard, par-72 layout.

Oliva Pinto birdied two of the first three holes, made the turn at 3 under, then birdied three more holes on the back nine to complete his bogey-free round on a breezy day with temperatures in the mid 80s.

Oliva Pinto, the reigning SEC individual champion, and Nieves are two strokes ahead of the trio of Vicente Marzilio, Andrey Borges and Martin Leon, who are tied for third with 68s.

Fellow Razorbacks Mateo Fernandez de Oliveira of Aregentina and Julian Perico of Peru are in a group of five players tied for sixth at 3 under.

Fernandez de Oliveira, playing in the morning, birdied Nos. 12, 17 and 18 en route to his bogey free 69 the week after winning the South American Amateur title in Quito, Ecuador. Perico, a senior from Peru who started on the back nine in the afternoon, was at 5 under through 12 holes and tied for the lead before carding bogeys on Nos. 5 and 8.

Juan Camilo Vesga, a redshirt freshman from Columbia, was in a group of six players tied for 11th place at 2-under 70. Vesga had five birdies and three bogeys and nearly holed out for an eagle with a bump-and-run iron shot on his final hole, which clanged the flagstick and rolled a few inches from the cup for a tap-in birdie.

Razorback sophomore Manuel Lozada of Argentina is tied for 19th place after shooting an even par 72 in the morning that featured three birdies and three bogeys.