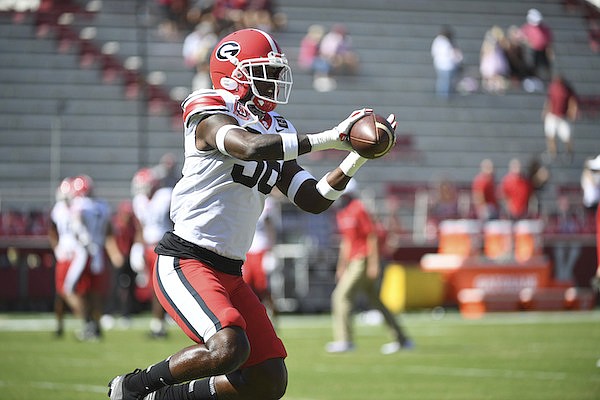 Georgia defensive back Latavious Brini (36) warms up against Arkansas during an NCAA college football game in Fayetteville on Saturday, Sept. 26, 2020. (AP Photo/Michael Woods)

He made an official visit to Arkansas last week.

“Coach (Sam) Pittman is great coach and even a better person,” Brini said at the conclusion of his visit. “He is always going to be there for his guys and make sure they are straight at all times.”

Brini was an ESPN 3-star prospect and No. 42 cornerback in the nation in the 2017 class out of Hialeah (Fla.) Mater Academy Char.

It is believed Brini also made an official visit to Texas after entering the transfer portal.

Brini is the fifth player to transfer to the Razorbacks this offseason. He joins LSU defensive lineman Landon Jackson and cornerback Dwight McGlothern, receiver Jadon Haselwood from Oklahoma and linebacker Drew Sanders from Alabama.