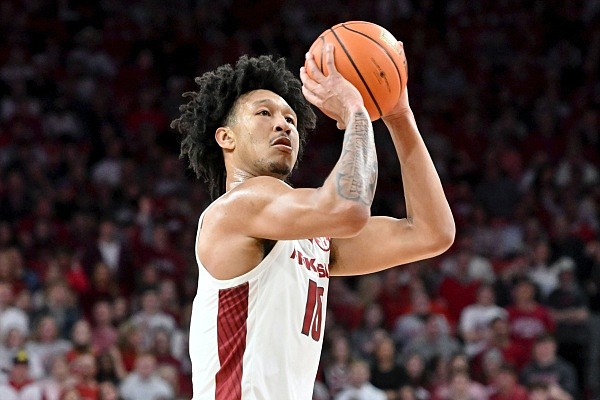 FAYETTEVILLE — The Arkansas Razorbacks beat South Carolina 75-59 last week without hitting a three-point basket for the first time in 1,092 games over 33 seasons.

When a team makes 27 of 33 free throws as the University of Arkansas did against the Gamecocks, three-pointers can become optional.

The Razorbacks’ advantage in free throws was especially impactful because the Gamecocks hit 12 of 24.

Arkansas leads the nation in free throws made with 332 and its 447 attempts are second behind Iona’s 456 with both teams playing 19 games.

Texas A&M-Corpus Christi, in 21 games, is second nationally in made free throws with 323.

The Razorbacks have capitalized on their free opportunities by hitting 74.3% to lead the SEC.

“They’ve found something that’s working,” said Joe Kleine, an All-Southwest Conference center at Arkansas who is now a game analyst for the SEC Network. “They’re not making it complicated.”

This is the seventh time in Arkansas Coach Eric Musselman’s seven seasons as a college head coach his team is among the top 25 nationally in free throws made and attempted according to UA media notes.

“You’re not facing as many transition situations when you get a high volume of FTAs.”

Arkansas’ average of 17.5 made free throws represents 22.1% of its total scoring average of 79.2 points to rank 15th nationally.

The Razorbacks are 13th in the SEC in shooting 29.2% on three-pointers.

“I like the fact that since they’re not a three-point shooting team, they don’t keep trying to put a round peg in a square hole,” Kleine said. “They’ve started driving the ball more and embracing that as their identity, and that’s why they’re getting to the free throw line so much.

“That’s good coaching and it’s smart by the players. It certainly has helped them turn things around.”

The Razorbacks (14-5, 4-3 SEC) have won four consecutive games and made 81 of 102 free throws in beating Missouri, LSU, South Carolina and Texas A&M.

“We just wanted to do what we do and stick to the game plan, which was attack the rim,” Arkansas senior guard JD Notae said after the South Carolina game. “And if the threes fall they fall, but if not, our identity is getting [inside] the paint and finishing in the paint.”

“We just drove a lot and picked up a lot of fouls in the paint,” Williams said.

Two years ago Arkansas guard Mason Jones led the nation in free throws made (233) and attempted (282). Last year guard Moses Moody was second in makes (151) and attempts (186) in his only season as a Razorback before being a first-round NBA Draft pick.

The Razorbacks don’t have as high a free throw volume shooter this season as Jones and Moody, but they’re getting to the line at a high rate collectively.

“The key is really just being aggressive,” Toney said. “We all know right now that we’re not shooting the ball as well as we want to, but we’re just doing what we can to get to the rim, get fouled, get foul calls and be able to step up to the line and make shots.”

Pat Bradley is the Razorbacks’ all-time leader in three-point baskets with 366, but the SEC Network analyst approves of how Arkansas is driving the ball and drawing fouls.

“Coach Muss gets guys in position to slash and cut to the basket,” Bradley said. “I think they’re a great interior passing team. His players seem very comfortable working within the paint.

“They pass it well in the paint, they catch it in the paint. They do a lot of damage in there that leads to free throws.

“I would much rather see a team going to the basket and making free throws than shooting 8 of 28 or 6 of 27 on threes,” he said.

“A lot of the coaches that I had and respected taught us that if a team’s on a run or things aren’t going your way, getting to the free throw line helps you calm things down,” Kleine said. “It helps relax you as a player if you can go to the line and make a couple. It makes you feel a little bit more confident and feel better about yourself.”

Musselman said the Razorbacks have struggled at times in practice to make free throws.

“That drill this year is taking us a little bit longer than prior years. But when we get in a game, we’ve done a good job because we have the right people taking the free throws.”