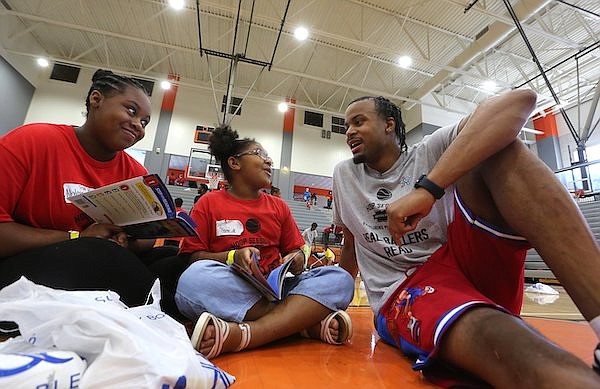 Alongside him came the Larry O’Brien Trophy which Moody lifted with the Golden State Warriors when they won the NBA championship in June.

But when it came time to end his day with family and friends, there was only one place to do it, the place where it all began — Positive Atmosphere Reaches Kids.

During Moody’s childhood, his father Kareem worked at P.A.R.K., an after-school and summer program for at-risk youth founded in 1995 by former NFL tight end and Little Rock native Keith Jackson.

“I was a baby walking around here,” Moody said. “This is my stomping ground. This is where I’ve been since I was an infant. It’s nothing but good, positive memories from this place.”

P.A.R.K.’s gymnasium, which features three full-length basketball courts, was where Moody first learned to play basketball — even scoring his first-ever basket on the gym’s center court.

“It’s crazy coming back home,” Moody said. “Even coming back here to this building. It’s just crazy having it be a part of every step of the way and bringing [the Larry O’Brien Trophy] here.”

Though he hasn’t been away from Arkansas long, Moody returns to his hometown as an NBA champion. Friday’s trophy tour was to share the achievement with those closest to him, but also to set an example like those before him.

“It makes it real for me, but it makes it just as real for other people, other kids,” Moody said. “They get to come touch the trophy, see the trophy [and] see an NBA player. Growing up, I saw [former NBA player and Arkansas Razorback] Joe Johnson a couple of times. He used to come back and give us opportunities to be around him, and that was everything. He’s kind of the blueprint.”

Moody attended both Little Rock Parkview and North Little Rock high schools before transferring to Montverde (Fla.) Academy as a junior. He then spent one season at Arkansas before being selected with the No. 14 pick in the 2021 NBA Draft.

Moody appeared in 52 regular season games for Golden State this season, averaging 11.7 minutes and 4.4 points per game. He appeared in 13 of the Warriors’ 22 playoff games en route to the NBA championship.

Winning an NBA title as a rookie is a great start to a career, but Moody said he is looking to improve upon it by winning another, this time with him as a consistent contributor.

“I got a front row seat on the road to the destination,” Moody said. “I got to see what it takes to make it, what it takes to win. I’ve been in those environments before, now it’s time to go do it again.”

He led the Las Vegas Summer League in scoring with 27.5 points per game. But Moody said he’s not as concerned with a summer stint as he is with what he can provide his team when it counts.

“I’m just kind of working on everything, you know, whatever it takes, whatever the team needs from me this upcoming season. I’ll be ready for it,” Moody said. “I’ll be ready to adapt, because every team has different [needs].”