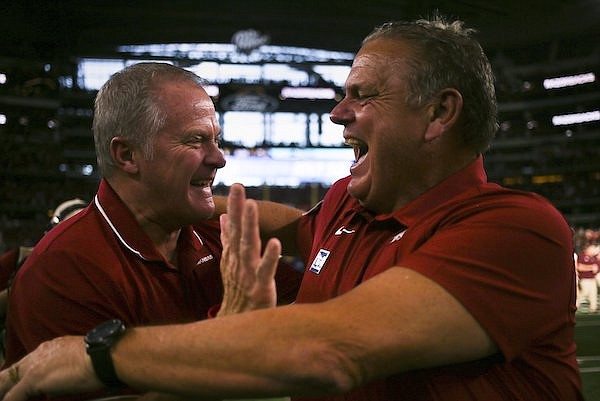 FAYETTEVILLE — University of Arkansas football coach Sam Pittman has signed a contract extension through at least 2026 that will pay him $5 million per year with escalators based on performance.

Pittman's new salary is a 66.7% increase from the $3 million he was in line to be paid before bonuses in 2021, when he led the Razorbacks to a 9-4 record and a 24-10 victory over Penn State in the Outback Bowl.

Pittman thanked UA Athletic Director Hunter Yurachek and others in a statement sent out by the university’s athletic department.

“Arkansas is where I want to be, this is my dream job,” Pittman said in a UA release. “I am so grateful for our University and Hunter for believing in me, our coaches and staff and the program we’re building. We are all excited to continue to build on what we’ve done and continue to make our fans and the whole state of Arkansas proud of our football team.”

According to terms of his original contract, Pittman was in line to receive a $750,000 pay raise for winning eight regular-season games in 2021. Late last year he hired a new agent, Jimmy Sexton, who proposed a much larger salary worth around $50 million over seven years, the Arkansas Democrat-Gazette reported.

Pittman is in line to be the highest-paid employee in UA athletics history. He previously had the second-highest UA salary behind Razorbacks basketball coach Eric Musselman, who received a pay raise to $4 million per year in April 2021. Musselman's salary is scheduled to increase to $4.1 million after he led Arkansas to its second consecutive Elite Eight in the NCAA Tournament.

Pittman's new salary is believed to rank ninth among SEC head coaches. According to an analysis of publicly available contracts, Alabama's Nick Saban is the league's highest-paid coach at $9.5 million, followed by Texas A&M's Jimbo Fisher and LSU's Brian Kelly at $9 million apiece.

Georgia coach Kirby Smart is reportedly negotiating a new contract. Smart was in line to receive $7 million last season when he led the Bulldogs to their first national championship victory in 41 years, a 33-18 win over Alabama.

New Oklahoma coach Brent Venables was hired at an annual salary of $7 million and Texas coach Steve Sarkisian is set to earn $5.4 million in the second year of his contract, which increases by $200,000 each year. The Longhorns and Sooners will enter the SEC by 2025, before the end of Pittman's new agreement.

Pittman's $3 million salary ranked 12th among 13 coaches at public universities in the SEC last season. First-year South Carolina coach Shane Beamer was reportedly paid $2.75 in 2021, and financial details were not publicly available for Clark Lea of Vanderbilt, which is a private school.

In addition to Pittman, Arkansas has made increased financial commitments to his staff of assistant coaches. The cumulative pay for the Razorbacks' staff of 10 coordinators and position coaches has increased by 20.9% to $6.44 million since the end of last season.

Pittman was hired by the Razorbacks in December 2019. The $3 million salary was thought to be attractive to both sides given Pittman had never been a major college football head coach and was paid $900,000 in his final year as an assistant coach at Georgia. Pittman's original contract included buyout language that limited the UA's financial obligation to Pittman if he was fired with a losing record, but increased if he won half or more of his games.

In two seasons as Arkansas' coach, Pittman has a record of 12-11, which includes a 3-7 record against an only-SEC schedule in his inaugural season in 2020. When Pittman was hired, the Razorbacks had just completed their second consecutive season with a 2-10 overall, 0-8 SEC record.

At the time Pittman was hired the Razorbacks were still on the hook for payouts to their previous two football coaches, Bret Bielema and Chad Morris. The Razorback Foundation reached a buyout settlement with Bielema last year after he sued the foundation in federal court, and buyout payments to Morris are scheduled to continue through the end of 2023.