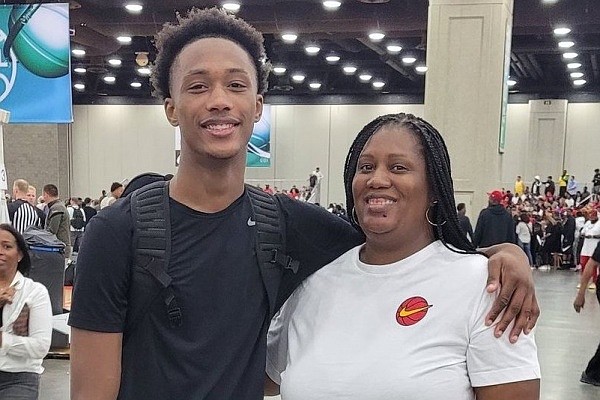 Tarasha Holland (right) and her son Ron Holland are taking the recruitment process one step at a time. Ron, who is from Duncanville, Texas, narrowed his list of possible schools to include Arkansas.

LOUISVILLE, Ky. — The recruiting process is once-in-a-lifetime opportunity for prospects while also being one of the biggest decisions in a young person’s life.

ESPN 5-star and University of Arkansas basketball target Ron Holland’s mother Tarasha said she is enjoying seeing her son go through the process.

“The recruiting process in general has been nothing but phenomenal,” Tarasha said. “We’re taking the process slow. Not really ready to make any sound decisions as of yet. Maybe by the end of the year, going into next year. We’ll see how far we go with it. Just enjoying the process right now.”

Holland, 6-8, 200 pounds, of Duncanville, Texas. narrowed his list of possible schools to Arkansas, Texas, UCLA, Memphis, Houston, Auburn and Kentucky on May 8, while also considering the NBA G League.

“Arkansas has been one of the schools that have kept him as a priority for the 2023 class,” she said. “They text him every day. They text dad every day. I hear from them every now and then but I’m busy with work, so I don’t get the chance to interact them via text or telephone. But Coach Musselman, Coach [Keith] Smart … they’ve been nothing but phenomenal recruiting him.”

Whichever lucky school signs Holland, they’ll get one of the premier recruits in the country. He is rated the No. 2 power forward and the No. 4 overall prospect in the nation for the 2023 class.

“Ron Holland possesses an every-day effort that is hard to find,” ESPN national recruiting director Paul Biancardi said. “His combination of a never-ending motor and high-end athletic ability is a major starting point. I love him as a switch defender at multiple spots because of his lateral base and foot speed.

“He can and will run with energy to finish a fast break and in the half court his drive game, cut game and post-up game stand out. His jumper is improving because of his work habits. He knows what success looks like as a state championship at Duncanville and wants more.”

Arkansas critiqued Holland’s games this past season and currently while he’s playing for Dallas-based Drive Nation this spring.

“They’re keeping him on his toes,” Tarasha said. “They text him after every game and let him know what type of game he had and what he can and cannot do better, and they also tell him where he would fit in their program. I think they’re doing an awesome job recruiting him. I can say right now because they’re in his top eight. Hopefully they’ll make his next top list whenever he decides to drop that, and we’ll just move from there.”

She said other schools are also doing a good job of making her son a priority. The 5 1/2=hour drive from Dallas to Fayetteville is attractive for her and his father.

“It’s close to home so again we want him to stay as close to home as possible, but we’ll see at the end of the day,” Tarasha said. “It’s going to be his decision along with our’s. Hopefully we’ll make a good one.”