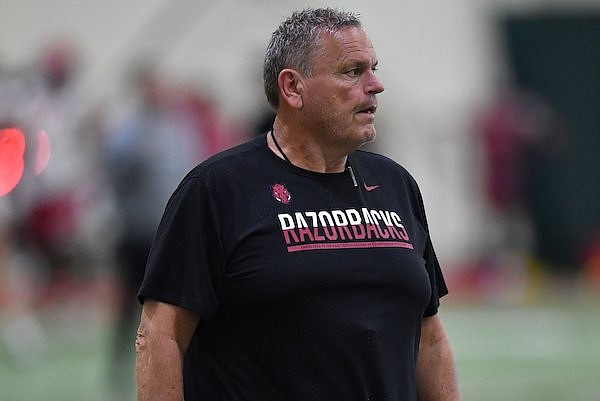 FAYETTEVILLE — Word was out April 16 that Arkansas football coach Sam Pittman had agreed to the terms of a raise and contract extension, and he confirmed as much later that day after the Razorbacks’ spring showcase inside Walker Pavilion.

Gearing up for his third season at Arkansas, Pittman put pen to paper May 31 in Destin, Fla., on a deal that runs through at least the 2026 season and will pay him a base salary of $5 million per year. He celebrated the moment with his wife, Jamie, administration and other Razorbacks coaches, including Eric Musselman and Mike Neighbors.

Pittman described it as an unbelievable night.

“I mean, I'm so fortunate. I really am so honored,” he said Tuesday during a Zoom press conference with reporters. “(Arkansas athletics director) Hunter (Yurachek) had the contract and we went up to his room and signed it. (Then) we all went to dinner. But it was a wonderful night for not only myself, but for Jamie, as well.

“And it was really cool that we got to celebrate that night together. Just a privilege and honor to be the head coach at Arkansas. And that's how I felt.”

Pittman, who is 12-11 through his first two seasons as a head coach, said he felt relieved to have his new deal in place, announced and now behind him.

“In all honesty, even though you're not trying to think about it as it continues to go longer and longer, it wears on you, and you don't want it to,” Pittman said. “You're getting paid, you have a job to do. But when we signed it, it was a relief and an honor. It was an honor that the school thought enough of me to give me a longer contract and, obviously, the financial benefit of that and things of that nature.

“But it was probably a relief, but also very humbling and an honor that as long as we can keep winning and things that I could be the head coach at Arkansas for several years. And that was the goal of it.”

Yurachek, who was Tuesday’s keynote speaker at the State of Athletics luncheon at the Fayetteville Public Library, shared a similar sentiment as Pittman. It was a weight off of both of their shoulders.

“This is where he wanted to be,” Yurachek said. “I wanted him to be here. Just to be able to put that into writing in a contract that will take him to when he wants to finish coaching and beyond, it’s great.”

Overall, Pittman is “very, very pleased and happy” with the contract and the incentives therein. His new deal, he said, placed him ninth among SEC coaches and, considering he has been a head coach for two years, the pay seemed fair.

He added that his agent, Memphis-based Jimmy Sexton of Creative Artist Agency, did a “wonderful” job communicating throughout.

“I was very conscious of wanting it to be fair for the university, as well,” Pittman said. “I was ecstatic to get it. You'd have to ask Hunter, but I think (Sexton and Yurachek) have a really good relationship from this contract, and I'm pleased this will be my last coaching job.”

The announcement of Pittman’s new contract came just ahead of the Razorbacks beginning their eight-week summer conditioning period. In the coming months, Arkansas’ central focus will be on sharpening the body and mind.

Pittman also mentioned multiple times that an emphasis is being placed on teaching the game in meeting rooms and improving ball skills.

“If we have the opportunity to have the ball underneath our arm, we want to make sure we keep it there,” Pittman said. “And certainly if we have an opportunity to pick a pass or catch a pass, we don't want any drops. A five-minute period (Tuesday) is actually going to be about ball skills.

“We're trying to teach the young guys. We think we have some talented guys that still came in. We certainly have to get a look at those guys. We can see them a bit more this summer with the new rule."

In terms of leadership on the offensive side of the ball during the summer months, Pittman and his coaching staff are looking for the offensive line to step up, as well as quarterback KJ Jefferson and running backs Raheim Sanders and Dominique Johnson. Questions remain at receiver, he said.

Pittman noted that Johnson, who did not participate in spring practices due to an undisclosed injury, is running and ahead of schedule. He estimated in April that Johnson could be ready to return by mid-summer.

Defensive lineman Isaiah Nichols, linebacker Bumper Pool and defensive backs Simeon Blair and Jalen Catalon are expected by Pittman to spearhead their groups. Dorian Gerald, a defensive lineman who was recently awarded a seventh season of eligibility following a series of injuries and the covid-19 pandemic season in 2020, is a candidate to lead, as well.

“The first two days in here he is working his tail off,” Pittman said of Gerald. “More important than anything, the kids were really excited to see him come back. … I think we have plenty of leadership on the team. I think we are a hungry team.

“I think we are working extremely hard, even though it's just been a couple days."

Gerald’s return is of great significance given the uncertainty around defensive tackle Taurean Carter’s availability in 2022. He injured his knee April 16, and Pittman said “we’re hoping” he is able to play this fall.

Prior to his injury, Carter was among Arkansas’ top performers in spring drills, consistently flashing an ability to slip into the backfield and make plays. The Arkansas Democrat-Gazette reported he had surgery on the injured knee in early May.

“He’s working awful hard to heal up, to get his injury healed up as fast as possible,” Pittman said. “But there are restrictions, obviously, on the injury that he had. He’s working his tail off.

“If there’s anybody that's going to get back at some point this year, I believe it’d be him, though. He’s got a strong desire to do that.”