Varnado says he will transfer to Arizona State 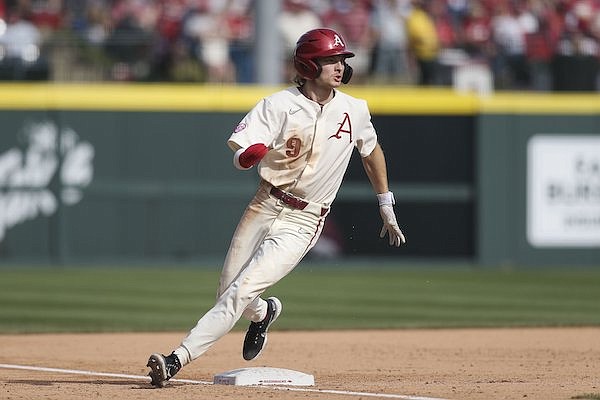 Arkansas pinch runner Drake Varnado turns at third base during a game against Mississippi State on Sunday, April 3, 2022, in Fayetteville.

FAYETTEVILLE — Drake Varnado, who played his freshman season at Arkansas this year, will transfer to Arizona State, he said Wednesday in a post to his Twitter account.

Varnado was listed on the Razorbacks’ roster this season as an infielder, but started three games in the outfield. He saw playing time in 15 games as a true freshman.

A Port Neches, Texas, native who played high school baseball at IMG Academy in Florida, Varnado had a .235 batting average in 17 at-bats.

He played his final game May 19 at Alabama when he entered as a pinch runner in the ninth inning. He started one game in left field and started twice in right field during midweek nonconference games, most recently during the first game of a doubleheader against Arkansas-Pine Bluff on April 12.

Varnado was not on the Razorbacks’ 27-man roster for the NCAA Stillwater Regional that concluded Monday.

A transfer database at D1Baseball.com lists Varnado as one of two Arkansas players who have entered the NCAA transfer portal since the end of the regular season. Right-handed pitcher Mark Adamiak is also listed.

A program spokesman was unable to confirm whether the players had entered the portal.

“Looking forward to the next chapter in my career!” Trapani wrote.

Like Varnado, Adamiak was not on the roster for the regional in Stillwater. The redshirt sophomore had a 3.95 ERA in 13 2/3 innings this season.

Adamiak made nine appearances, including three starts during midweek games in March. He has not played since a five-pitch relief appearance against Central Arkansas on April 26 in North Little Rock.

Adamiak signed with Wichita State out of his high school near Kansas City but was released from his commitment following a coaching change. He pitched twice before the 2020 covid-19 shutdown and redshirted in 2021.