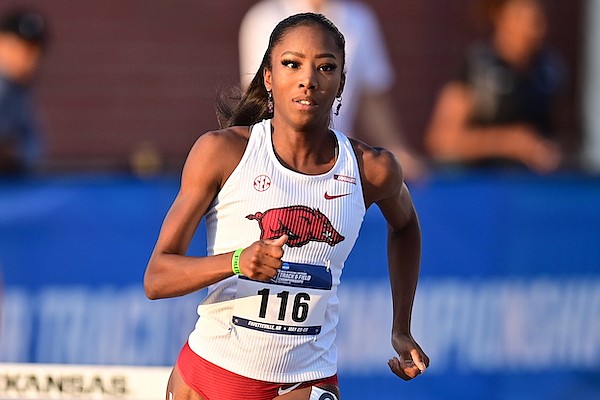 Arkansas' Britton Wilson runs during the 400 hurdles during the NCAA West Preliminaries on Saturday, May 28, 2022, in Fayetteville.

FAYETTEVILLE — University of Arkansas sophomore Britton Wilson had fairly modest goals going into her first track and field season as a Razorback after transferring from Tennessee.

Wilson, the Virginia Gatorade Female Track Athlete of the Year at Mills Godwin High School as a senior in 2019, wanted to run a personal-best time in the 400-meter hurdles, make the final at the SEC Championships and qualify for the NCAA West Preliminaries.

Most importantly, Wilson wanted to find the joy in competing she had in high school, and that had been lost when she struggled in two years at Tennessee.

“I honestly kept my goals pretty small,” she said. “I wasn’t expecting to do so many big things.”

Wilson has been one of the biggest stars in the college track and field this season and is the favorite in the 400-meter hurdles going into the start of women’s competition today at the NCAA Outdoor Championships in Eugene, Ore.

The 5-foot-5 Wilson became the first athlete in the 41 years of the women’s SEC Championships to win the 400 and 400 hurdles when she swept the titles by running Arkansas school-records of 50.05 seconds and 53.75 seconds. She also anchored the Razorbacks’ 1,600-relay team — which also included Morgan Burks-Magee, Rosey Effiong and Jada Baylark — to a school-record 3:22.55.

Two weeks ago at the NCAA West Prelims, Wilson had the top mark in the 400 hurdles and anchored Arkansas to a victory in the 1,600 relay.

Because the 400 final at the NCAA meet is being run within 30 minute of the 400 hurdles final on Saturday, Wilson will focus on the hurdles and relay.

“I’m just happy to be where I am, and all the success I’ve had so far is really encouraging me to keep going,” Wilson said. “I think I have a lot more in me.

“I would say one of the biggest thing for me has been my mindset and learning how to control a lot of anxiety and self-doubt I had before.”

Wilson credits her training with Arkansas sprints coach Chris Johnson — who after the 2023 season will be promoted to replace the retiring Lance Harter as the Razorbacks’ head coach — as a key to her success.

Johnson has stressed strength and endurance in workouts, Wilson said, where at Tennessee the training was more about speed.

“Coach Johnson is definitely intense, and it took a little getting used to working with him,” Wilson said. “But you know he wants the best for you, so once you get used to how he coaches, he’s great to be around. He’s a very nice and caring man, so I love training with him.”

Wilson said her workouts at Tennessee were more geared to what the men do, whereas at Arkansas the men’s and women’s programs are separate.

“I definitely agree with the philosophy that men and women train a lot differently in all aspects,” she said. “We’d do the exact same workouts as the boys at Tennessee, and something that worked really well for the boys wouldn’t work well for me.

“I noticed I’d be giving 100% at practice and doing all the little things, eating right and sleeping right, and I still wasn’t getting better. The training just wasn’t what I needed.”

That’s changed for Wilson at Arkansas.

“Obviously the results speak for themselves,” Harter said. “Chris coaching Britton is a perfect match.

“I think that trust and bond is very special. Britton never doubts the plan that Chris has put together to take her to greater heights.”

“Most athletes would have balked at doing that,” Harter said. “But Britton knew that she was well prepped to handle the challenge because Chris had said, ‘Hey you can do this.’ ”

A year earlier at the 2021 SEC Championships, Wilson fell going over the third hurdle in the preliminaries. She finished 21st in 1:05.63.

“That was honestly the point where I knew something had to change,” Wilson said. “It was pretty heart-breaking for me, but I got up and just kept moving.”

Wilson said more than 20 schools showed interest when she went into the transfer portal, including Arkansas, Oregon, UCLA, Texas Tech and Miami.

“It was definitely a little overwhelming at one point getting calls from all these different coaches, but it was exciting knowing a lot of people were interested in recruiting me,” Wilson said. “Honestly, after I took my visit to Arkansas, I knew this is where I wanted to go.”