Hogs to play at Baylor in Big 12/SEC Challenge 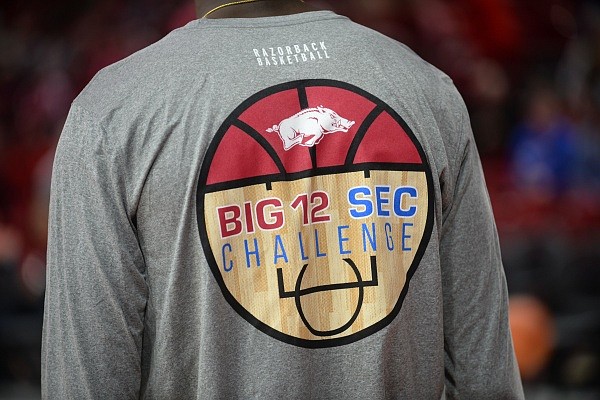 The back of a t-shirt is shown prior to Arkansas' game against TCU on Saturday, Jan. 25, 2020, in Bud Walton Arena in Fayetteville.

Arkansas’ men’s basketball team will play one of the game’s premier programs in the upcoming Big 12/SEC Challenge, it was announced Thursday.

One of the 10 matchups in the event includes a Razorbacks road game against Baylor. The game is set for Jan. 28 in Waco, Texas.

In addition to Baylor, the Razorbacks in 2022-23 are set to play three games at the Maui Invitational from Nov. 21-23 and against Oklahoma in Tulsa on Dec. 10.

Arkansas is 96-48 all-time against Baylor, including 37-32 in Waco. The Razorbacks last played at Baylor in 1991, when they defeated the Bears 73-68 behind 22 points from Oliver Miller.

The programs have met only three times since. Baylor has won the last two meetings, in North Little Rock in 2009 and in the Elite Eight of the 2021 NCAA Tournament in Indianapolis en route to a national championship.

Under Scott Drew, who has led the program since 2003-04, Baylor has won an average of 27 games the last three seasons.

Other matchups include Kansas at Kentucky; Texas at Tennessee; TCU at Mississippi State; Alabama at Oklahoma; Auburn at West Virginia; Ole Miss at Oklahoma State; Florida at Kansas State; Iowa State at Missouri; and Texas Tech at LSU.

According to a release, ESPN, ESPN2 and ESPNU will televise the games. Tipoff times and TV designations will be announced at a later date.