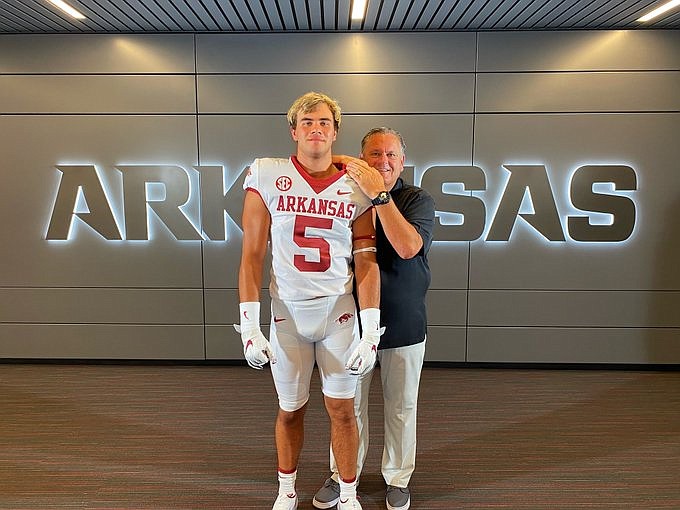 FAYETTEVILLE — Arkansas tight end commitment Luke Hasz wrapped up yet another visit to Fayetteville on Sunday.

This time the trip to Arkansas was an official visit.

"It went good,” said Hasz, who was hosted by long time friend and offensive lineman Brady Latham. “I've been down here a bunch and I just love it down here.”

The highlight of the visit was hanging out with current Razorbacks.

"Probably getting to spend time with the players again and building a relationship with the recruits and stuff,” he said.

His sister, Jenna, graduated from UA, and his aunt, Jennifer Rouse, also is an Arkansas graduate. ESPN rates Hasz a 4-star recruit, the No. 2 tight end and No. 64 overall prospect in the nation for the 2023 class.

As a junior, Hasz helped lead Bixby to the Oklahoma 6A-II state championship and was named a second-team All-American by MaxPreps after recording 33 catches for 436 yards and 2 touchdowns.

"It meant a lot. He didn't get offered because of me. He earned it,” said Hasz, who officially visited Alabama earlier in June. “If he got offered because of me it would have been a long time ago. He had to earn it and they had to come out and watch him at spring ball and all that stuff."