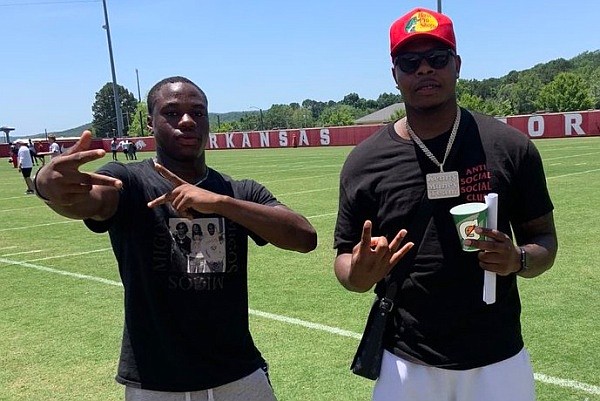 Junior athlete David Eziomume visited Arkansas on June 10-12 and felt at home while being impressed with Fayetteville.

“First off, I really loved the city,” Eziomume said. “The players and the coaches made it really easy for me to get into it. They made me comfortable. I just feel like Fayetteville is like a great city that nobody knows about.”

He made his first trip to Fayetteville with his teammate and 4-star Arkansas quarterback commitment Malachi Singleton.

“I really felt like at home, especially with my quarterback,” Eziomume said. “He was already at home. I honestly thought it was going to be having to get comfortable with things. It’s Arkansas, it’s a new state, but honestly felt very much at home. Everywhere I went it just felt at home.”

Freshman linebacker Jordan Crook and his former teammate and freshman receiver Sam Mbake, along with other players, made him feel at ease.

More from WholeHogSports: Coverage of Arkansas' first win at the College World Series

“Everybody just seems to make it like you’ve been there,” Eziomume said. “They’re already comfortable with you and they know so little about you. I feel like that’s what makes it really different.”

“I met Coach Smith for the first in-person,” Eziomume said. “You can tell he wants the work done, but he’s probably one of the coolest coaches you ever meet. A very honest and a very great guy. He’s very funny.

"He made it feel like I’ve known him for so long. Coach Smith is going to be somebody I keep in touch with.”

Eziomume, who had 12 catches for 147 yards and 1 touchdown, and rushed 18 times for 136 yards for the Class 7A Warriors last year, could play running back or receiver on the next level.

He’s visited another Power 5 school recently, but it didn’t compare to Arkansas.

Singleton gave him a heads-up about what to expect at Arkansas, but he wasn’t expecting what he experienced on the three-day visit.

“He told me the city was special and I wanted to see what he was saying,” he said. “Now I know what he’s saying about the city. It’s very special. Everybody is just so comfortable with each other. You can tell the love is there in Arkansas. It’s just like a big heart in the middle.”

More from WholeHogSports: The latest in Razorback recruiting

The Razorbacks improved their chances to land Eziomume.

“It makes the chances higher, honestly,” he said.

Eziomume learned why the school and the area carries the nickname of The Hill.

“It really just shocked me. It’s literally a hill,” said Eziomume, who mentioned visiting for the season opener against Cincinnati as a possibility. “I thought it was a joke because one of the receivers told me it’s a hill. I’m like, you’re kidding.”

He also understands why many of the Razorbacks players have scooters to get around campus.

“They’re trying to save their legs,” he said.