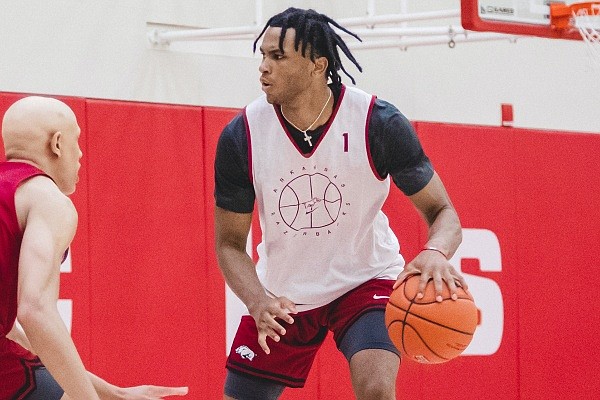 Arkansas wing Ricky Council looks to make a play on June 9, 2022, during a practice at the Razorbacks' practice facility in Fayetteville.

FAYETTEVILLE — A five-second video posted to an Instagram story is all Davonte Davis needed to see to elevate his expectations for the Razorbacks next season.

On his cell phone from his home in Jacksonville, Arkansas’ third-year guard caught an eye-opening glimpse of Ricky Council’s athleticism. In late May, the Wichita State transfer had just reported to campus and settled in, then he made his way to the Razorbacks’ practice facility with other newcomers.

Council, a bouncy 6-6 wing with plenty of potential on the defensive end, figures to be a key to Arkansas’ success in 2022-23 as it aims to build on back-to-back Elite Eight appearances. He stunned Davis last month with his open-floor ability and has done more of the same in the Razorbacks’ summer practices and workouts since.

Arkansas coach Eric Musselman added that Council has had at least one “wow” moment each day the Razorbacks have been on the floor together.

“At minimum one,” Musselman said. “It might be a dunk, it might be a finish in traffic. But he plays with an incredible energy.”

With 11 newcomers — six freshmen, five transfers — on Arkansas’ roster, roles for the upcoming season are up for grabs this summer. Strong showings behind closed doors and in front of the coaching staff are paramount in securing playing time.

Council, by all accounts, has put his best foot forward in a short amount of time. To this point, he has showcased all three of Musselman’s base principles — effort, energy, enthusiasm — and appears to be in his good graces.

“I’ve never had a player in 5-on-0 skeleton when we dry run our opportunity break in transition, I’ve never had a player — in all the years, including NBA, minor leagues — run the wing so hard in 5-on-0 skeleton dummy offense,” Musselman said. “Maybe to some coaches they just mention it in the staff meeting. To me, it’s going to factor into his playing time that he runs that hard, quite frankly, and he’s doing it in 5-on-0.

“What all this is about is: Who do you trust by how they conduct themselves daily in practice? I’ve got a lot of trust in Ricky, I can tell you that right now, just by how hard he’s running, playing, doing the things that we want.”

Asked what he thought about the early praise from Musselman, Council deflected in a way. Running the floor with purpose is a priority this summer, and he is hopeful that intentionality will benefit him when the lights are brightest.

According to CBB Analytics, Arkansas was in the 89th percentile nationally in 2021-22 with 12.6 fast-break points per game. An athlete like Council can help the Razorbacks exceed that figure.

Council made 51 of 91 (56%) attempts at the rim last season with the Shockers, according to Hoop Math data. The rim scores and attempts were both good for No. 2 on the team.

“I know they like to play fast, so if I run the wing like that every time, they’re going to find me,” Council said. “I’m just focused on it right now so it can carry over into the season.”

Beyond his athletic ability, Council has impressed Davis with how rapidly he has picked up Arkansas’ schemes and the minute details.

“Even in the weight room, he said they didn’t do it down at Wichita State like we’re doing it down here,” Davis added. “It’s kind of new to him, but he’s learning really fast. You can tell he’s mentally ready for what’s next.”

Council, in part, credited that mental readiness to those he spoke with prior to signing with the Razorbacks. At Wichita State, he was close with Trey Wade, who played at Arkansas last season, and the two talked throughout 2021-22.

Once in the NCAA transfer portal, Wade offered advice and insight into the program. Council said he was also in touch with Au’Diese Toney, Arkansas’ premier perimeter defender a season ago.

“I really like (the team),” Council said. “It’s a good group. Good group of guys off the court, as well. Fun to play with, and very competitive. That’s what I like, for sure.”