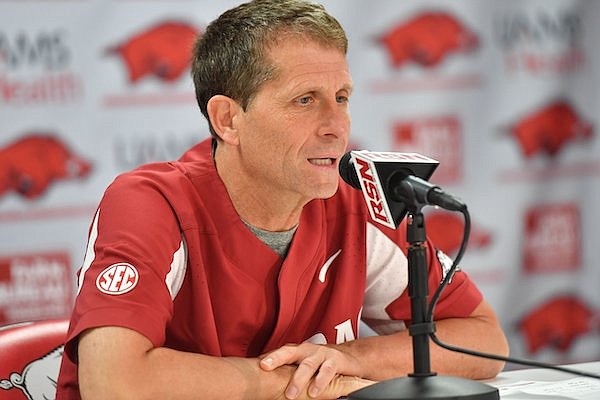 It could turn out to be one of his most brilliant coaching moves ever.

Arkansas Razorback head basketball coach Eric Musselman, who seems to have a wealth of contacts, has accepted an offer to take his team to Europe and participate in an international tournament.

With only two players returning from last year’s Elite Eight team, Musselman will have a record number of newcomers.

While they will get to know each other during limited practices and unlimited pick-up games this summer, an 11-day trip where they sleep and eat together 24-7 will give them a chance to really bond.

The Hogs will travel to Spain and Italy and play four games.

NCAA rules allow for 10 full practices prior to an international tournament.

This will be Musselman’s third international trip with a team, once as an assistant and once as head coach at Nevada.

When the Arkansas Razorback fans in Omaha for the College World Series set a world record for Jell-O shots it made national news.

The Omafans bought 6,526 shots at $4.50 each at Rocco’s Pizza and Cantina, according to a Twitter post Tuesday morning.

Before you consider opening a Betty Ford clinic in Northwest Arkansas, take into consideration that the Razorbacks appear to easily have the most fans on hand for the World Series.

It is also doubtful a full shot of alcohol is in a Jell-O shot.

Ole Miss fans were second, so maybe they should have had the contest in a grove of trees.

The real winners are the owners of Rocco’s Pizza, as more than 13,000 shots have been bought based off Tuesday’s Twitter post.

Last week, Charles Barkley was asked about the controversy involving the PGA and LIV Golf, and he held nothing back.

The PGA is not happy to have competition and golfers seem divided.

It isn’t the money that is controversial. It is that LIV is backed by Saudi Arabia money, a country not known for human rights, and because two of its eight tournaments will be played on Donald Trump-owned courses.

Barkley is a former NBA star who is now a TNT broadcast star.

Mickelson is 52, and most of his income now comes from endorsements, although reports are his worth is north of $300 million.

Rory McIlroy, who has become the unofficial spokesperson for the PGA, said he understands how guys in their twilight might like LIV, which has 54-hole tournaments instead of 72.

Johnson, though, is 37 and in his prime. He has already earned more than $70 million on the PGA Tour plus endorsements.

Mickleson and Johnson are going to be financially fit for life even if the LIV isn’t.

She has become one of my favorite athletes of all time.

Swimmer Katie Ledecky has won more gold medals between the Olympics (6) and World Championships (13) than any female in history and she is just 25.

In the 1,500-meter freestyle this week, she won by so much that no other swimmer was in the TV picture.

After every win she gets out of the pool with an almost sheepish smile.

In interviews, she comes across and humble and nice, the type of person you would invite to Thanksgiving dinner.

This is a person who should be making millions from endorsements. She currently makes a reported $1 million a year.