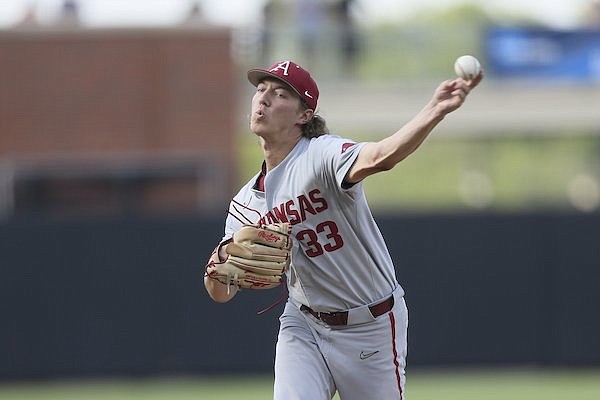 OMAHA, Neb. — Arkansas will turn to freshman left-handed pitcher Hagen Smith with the season on the line Wednesday.

Smith will start the Razorbacks’ must-win game against Ole Miss at the College World Series. Smith, named a Freshman All-American by Collegiate Baseball Newspaper, will start his 15th game, but his first since May 14 against Vanderbilt.

Arkansas has used Smith in a closer role this postseason. He has allowed 3 runs, 5 hits and 5 walks in 5 2/3 innings during the NCAA Tournament, and recorded saves in back-to-back games against Oklahoma State in the decisive game of the Stillwater Regional and North Carolina in the first game of the Chapel Hill Super Regional.

The Razorbacks (45-20) must beat the Rebels (39-22) on Wednesday to force a decisive national semifinal game against Ole Miss on Thursday.

The Rebels, who defeated Arkansas 13-5 on Monday, need only one victory to advance.

Smith struggled in his next two starts against Auburn and Vanderbilt, and has pitched five times from the bullpen since. He has not pitched since June 12 at North Carolina.

Ole Miss hits .251 against left handers, compared to .294 against right handers. Arkansas coach Dave Van Horn referenced that fact when he was asked why he started left hander Zack Morris against the Rebels on Monday. Morris struggled with command and allowed two runs before he was taken out of the game with two outs in the first inning.

“You dig deeper into the stats, most of the damage they do — home runs, big innings, extra-base hits — come off right-handed pitchers,” Van Horn said Monday.

Ole Miss is expected to start left hander John Gaddis against the Razorbacks on Wednesday. Gaddis (3-1, 4.40 ERA) has pitched only once since the end of the regular season, on June 6 when he allowed 1 run on 2 hits in 2 innings during a 22-6 victory over Arizona in the championship game of the Coral Gables (Fla.) Regional.

Gaddis allowed 2 hits and 1 walk in 2 1/3 innings of scoreless relief at Arkansas on May 1 in his first outing following an appendix surgery 15 days earlier.