'It's one in a million': Williams shares big night with family and hometown 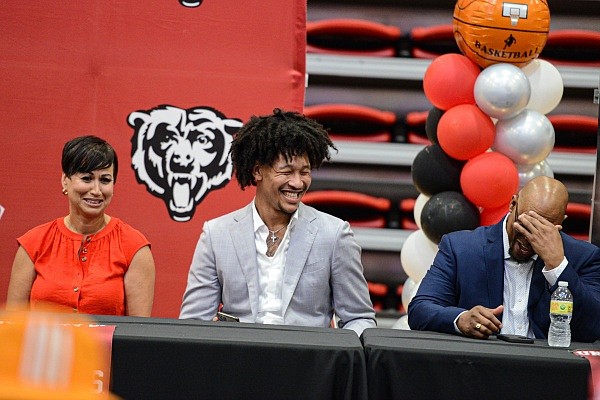 FORT SMITH — Sitting high atop a computer desk and propped against the back wall in Fort Smith Northside boys basketball coach Eric Burnett's office is a glossy photo of Jaylin Williams finishing a layup at Tennessee during his freshman season at Arkansas.

On the wall to the right of his desk hang signed and framed jerseys of the Philadelphia 76ers' Isaiah Joe and the Pittsburgh Steelers' Tre Norwood. Both players were drafted in their respective sports in the last three years and won a state basketball championship with the Grizzlies under Burnett in 2017.

In the not-too-distant future, Burnett will own another signed NBA jersey from a former player and state champion.

"I have this little spot saved just for (Jaylin),” said a smiling Burnett, pointing toward the wall opposite the two other jerseys.

Williams, who played two seasons for the Razorbacks and was a key part of a pair of Elite Eight runs, bet on himself this spring and went all in on the NBA Draft. His professional basketball dream was realized Thursday night inside Northside’s arena when the Oklahoma City Thunder selected him with the No. 34 overall pick.

Williams’ first workout before the NBA Scouting Combine was with the Thunder.

“It’s great,” a teary-eyed Williams said. “It means I can still see my family a good amount of the time. My sister, she lives there and family is still close. It’s great. I’m ready to go.

“Always bet on yourself. If you don’t believe in yourself more than everybody else, there’s no point in everybody else believing in you. I believed in myself going into this process. I went into every workout just trying to be the best me. It worked out for me.”

Wearing a light gray suit and his trademark smile, Williams was surrounded by approximately 200 family members, friends and mentors at his old stomping grounds as the draft unfolded.

Those in attendance at his private watch party erupted shortly after 10 p.m., three-plus hours after Williams made his grand entrance at the event. The roar also came more than an hour after many jumped the gun when Santa Clara’s Jalen Williams was taken No. 12 overall.

His life changed seated at a table between with his father, Michael, and his mother, Linda. Williams’ brothers and sister accompanied them.

After receiving the call from his agent, Williams initially kept his emotions in check. The tears began flowing a few minutes later.

"They're getting a high-character guy," said Burnett, who added he spoke with three teams about Williams in the last month. "When you ask him to do something, they can just take it to the bank that Jaylin is going to do whatever he tells you he's going to do.

“Jaylin is going to always think about the team."

Burnett said Williams sent him a text message about three weeks ago asking if he could use the school’s arena for his watch party. The coach woke up from a nap and read the note.

He joked that he could not dial Williams’ number fast enough.

"I said, ‘Yes, man, that would be great,'" Burnett added. “I told him I would do anything he needed me to do. Me and his dad started meeting every week just to make sure everything was what they wanted and was done.”

Having the watch party in Fort Smith was a no-brainer for Williams, who recently added tattoos of the front of Northside's school building and street signs that read "Fort Smith" and "Arkansas" to his right arm. It was all about family.

The city and people who helped shape him got to revel in a special moment with him.

“The main reason I wanted to bring it back here was just because I wanted all my family to be here,” he said. “Like, probably more than half the people in this room are family to me. This past year hasn’t been the easiest year for us.

“Sharing this with everyone I love and my family, I didn’t want anything else.”

Williams’ father, asked to describe the totality of the night, found his mind racing in a number of directions. He thought of his mother, Cora, who passed away in November.

He also thought of the process, which started when Williams was young and went all in on basketball. He radiated joy.

“Trust me, my heart skipped three beats. Just to see him … trust me, he’s happy to be there. I just know that he’s happy. He’s happy. I’m happy. Trust me, it’s worth it, man.

"Being amongst family and friends, you can’t change that. It’s one in a million.”

As is Williams. After the majority of attendees left the party, he spent 10 minutes clearing tables and throwing away trash.

"Got to stay humble," he said.