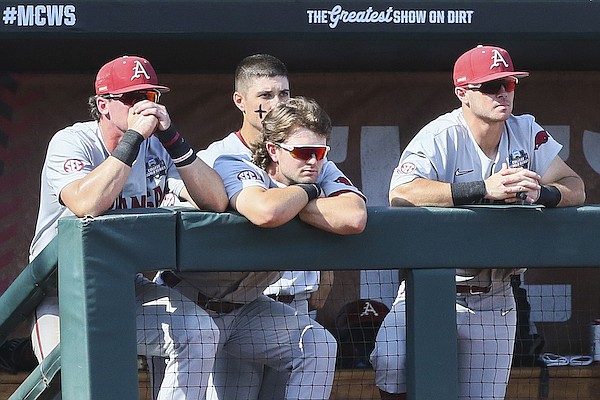 OMAHA, Neb. — Fans of quality pitching and defense got their money’s worth in Thursday’s Bracket 2 final at the College World Series as University of Arkansas ace Connor Noland and his Ole Miss counterpart Dylan DeLucia spent the short afternoon dealing.

Noland blinked first, though not much, and the Rebels parlayed the small opening into a 2-0 win that launched Ole Miss into its first CWS championship series and ended the Razorbacks’ season.

Arkansas (46-21) needed to beat the Rebels (40-23) twice after losing to them in the winner’s bracket game Monday. Noland (8-6), who had been 3-0 in the NCAA Tournament, provided the kind of start on four day’s rest that would have looked like gold on most other days.

However, DeLucia delivered in even bigger fashion, allowing four hits and five baserunners in the first shutout by an SEC pitcher at the College World Series since LSU’s Brett Laxton in 1993.

“What a great pitchers duel,” Arkansas Coach Dave Van Horn said. “I think both pitchers gave it everything they had. … It’s one of the best pitchers duels I’ve seen up here.”

The Razorbacks, making their seventh CWS appearance in 19 opportunities under Van Horn, came up short of reaching their second final in four years and their third in school history.

Ole Miss, the last team to make the 64-team bracket as stated by the NCAA selection committee, advanced to face Bracket 1 winner Oklahoma in the best-of-three championship series starting Saturday.

Ole Miss’ previous longest run at the College World Series had been reaching the bracket finals in 2014 before losing to eventual national runner-up Virginia.

DeLucia (8-2), who had taken a no hitter through 4 2/3 innings in a 5-1 win over Auburn last Saturday, did not allow a baserunner with less than two outs to the Razorbacks, who got only two runners to second base.

“It’s hard to score against good pitching when the leadoff man doesn’t get on here and there,” Van Horn said.

“It was a shove-fest,” Burke said.

“A 2-hour and 4-minute pitching clinic,” Peterson added, moments before DeLucia struck out Chris Lanzilli with his 113th and final pitch of the game.

“Both Connor and Dylan pitched today like Friday night aces in the Southeastern Conference and were terrific and really kind of matching each other pitch for pitch,” Ole Miss Coach Mike Bianco said. “But the story of the day was Dylan, just a legendary performance.”

DeLucia threw the first shutout by a single pitcher at the CWS since Michigan’s Tommy Henry beat Florida State 2-0 on June 17, 2019.

DeLucia said he gained his fastball command later in the game but commanding his slider throughout.

“We just stuck with it,” he said. “Throwing it for first-pitch strikes, throwing it late in the count. But just attacked them at the end of the day.”

DeLucia, who entered the ninth inning with 102 pitches, was asked if he had any doubt he would get to finish up the gem.

“I just looked up and saw all those zeros going into the eighth, and I was just like, ‘It’s my time to finally finish this game,’ ” he said.

“Tip my hat to him,” said Arkansas third baseman Cayden Wallace, who hit a first-inning single and reached second base with two outs on Michael Turner’s single.

“He did a good job keeping us off balance and throwing strikes. He threw well, mixed up in and out. Our approach was to hit a line drive up the middle and just let the off-speed get in our bat path. I thought we hit the ball well as a team, but it just didn’t work out for us today.”

Lanzilli had a two-out single in the fourth before being stranded, then Robert Moore added the Hogs’ final hit, a two-out infield chopper in the seventh.

“A lot of credit to him,” Turner said. “It’s hard to go nine [innings] with a shutout. I know we barreled a lot of balls, but it doesn’t really matter if you don’t score.”

Noland said he knew he’d have to be on his A-game to give the Razorbacks a chance, and he turned in a 7-hitter with 2 earned runs and no walks through 8 innings.

“Yeah, I mean, he’s pitching lights out, and I knew it,” Noland said. “I was in the tunnel for most of the game, but I could hear the crowd going crazy. There was added pressure, but I already knew that coming into this game.”

The Rebels got all the offense they would need in the fourth inning on a pair of hits that just eluded Arkansas defenders after Noland faced the minimum through three innings with one strikeout, one hit allowed and a double play.

Leadoff batter Justin Bench’s sharp single skipped past Moore at second base. Bench advanced on a chopper to second by Jacob Gonzalez. Noland struck out Tim Elko to get an out away from escaping, but Kevin Graham pulled a first-pitch breaking ball just off the glove of a diving Peyton Stovall inside the first base line for an RBI double.

“It was a curveball right down the middle,” Noland said. “I was just trying to get ahead on him, and he’s a good hitter. They had a good approach on that.”

That score stood until the sixth inning, which Elko led off with a single to left. He moved up a base on Graham’s single and scored on Calvin Harris’ one-out, opposite-field single to right. From right field, Lanzilli cut down Harris at second base trying to stretch the hit into a double to minimize the damage.

Arkansas had two decent chances to score. After the singles by Wallace and Turner in the first, Lanzilli popped up Elko at first base for the final out.

Jalen Battles reached on Gonzalez’s fielding error at shortstop after Moore’s two-out single in the seventh. After a mound visit from Bianco, DeLucia escaped by inducing a first-pitch ground ball from Brady Slavens.

DeLucia needed only 11 pitches to complete the ninth inning on ground outs by Wallace and Turner and Lanzilli’s strikeout.