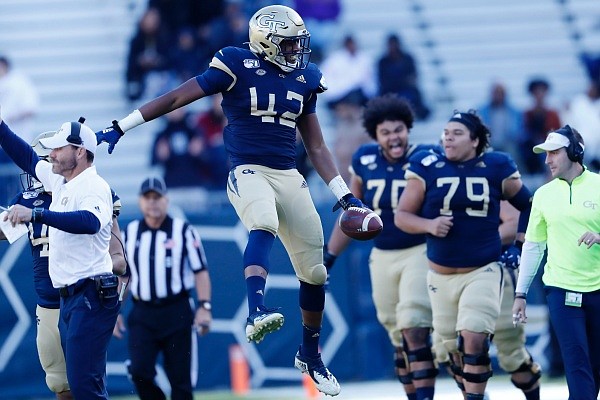 Georgia Tech's Jordan Domineck reacts after recovering a fumble in the first half of an NCAA college football game against the Pittsburgh Saturday, Nov. 2, 2019, in Atlanta. (AP Photo/John Bazemore)

As someone who has covered recruiting for 35 years now for newspapers and Hawgs Illustrated magazine, I get a lot of questions regarding who, where, why and how much money is involved with the advent of Name, Image and Likeness revenue for student-athletes.

One of the more frequent inquiries these days regards how the Arkansas football program is viewed by the college football world in terms of the combination of its 2022 high school and portal recruiting rankings.

That’s a difficult question to answer accurately as — to this point and for some inexplicable reason — none of the main recruiting services have a ranking that includes both high school and portal acquisition of talent.

I can reel off the fact that Arkansas’ high school (plus one Australian punter) early and late recruiting class is ranked 21st by ESPN, 26th by Rivals and 28th by 247 Sports.

You can also add that 247 sports’ transfer portal ranking has the Razorbacks No. 7 nationally.

That popped up again this week as the Razorbacks prepare to host Georgia Tech transfer edge rusher Jordan Domineck (6-3, 245), who they hope to add as a seventh off-season transfer. He will make an official visit beginning Friday.

“I’m excited to get up there to Fayetteville,” Domineck said Wednesday. “It seems like a great school and love the vibe and atmosphere I have been shown so far. The Arkansas coaches really seem to take the time to get to know their player, let you know where you stand with them and keep it real.

“I just want to go somewhere where I feel like it is going to really benefit me and my educational process as well develop me to possibly play in the NFL. Arkansas looks like a place like that and obviously has some of the best football with the SEC and just went 9-4 last season so (Arkansas head) Coach (Sam) Pittman and his staff are doing great things.”

Domineck, who got his bachelor’s business degree in December and has two years of eligibility left, does not try to hide the fact that he is transferring due to “PT.” But this time those initials don’t mean playing time.

In this case, it is physical therapy. He is seeking a school that offers a degree in kinesiology and exercise science, something that Georgia Tech does not have, but Arkansas does.

Domineck wants to become a physical therapist with his own practice or work with a college or NFL football team in that capacity.

“Arkansas definitely has what I need in that regard,” Domineck said. “That and playing in the SEC are big things in its favor.”

He is being recruited at Arkansas by Pittman, defensive coordinator Barry Odom and new defensive line coach Deke Adams.

“All of those coaches are cool and very knowledgeable,” Domineck said. “I have been very impressed.”

Domineck had 7.5 sacks and 14 tackles for loss the last two years while playing in 21 of 22 games and starting 12, including eight last season as a junior while totaling 446 defensive snaps per Pro Football Focus.

“I feel like I have been able to bring a lot to the table,” Domineck said. “I am a decent pass rusher and I am able to cause mayhem and work well on the defensive line, bring a lot of energy and overall positivity and production to the team. I feel like Arkansas might be that next place for me to do that.”

When Domineck entered the transfer portal on Feb. 19, he quickly got his first offer from Arkansas and then added Auburn, Michigan State, Nebraska, Indiana, Iowa State, Kansas and Penn State among 20 options.

“I’m looking for a place I can really develop on and off the field, a really good culture, a place I can feel like home,” Domineck said. “I wouldn’t say it has to be southern friendly, but I am from Florida and so I want to be at a place that has that same vibe.”

Domineck has official visits planned to Arkansas and Auburn (March 18-20) and may take more, but wants to make his decision sometime in time to be at his new destination in early May.

“I’m not sure I will take all five visits that I am allowed because if I find a place that fits me right away, I might just cut off the process early,” Domineck said. “But I go into it planning on taking five.”

“Coach Pittman has something special going on at Arkansas,” Domineck said. “I can’t wait to see more this weekend.”